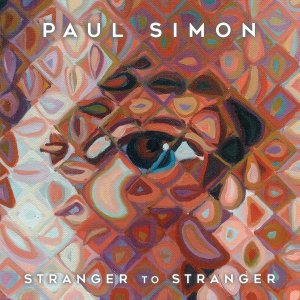 Paul Simon is one of the most iconic figures in modern music history.  He has been making music and making his own way in the industry for more than five decades.  And now some fifty-two years since he and former partner Art Garfunkel first formed he is still going strong having recently released his latest album.  Stranger To Stranger, his thirteenth album, is his thirteenth full-length solo recording.  It was released earlier this month in stores and online.  And it is an album that is well worth the listen.  That is because yet again Simon has offered up a collection of songs in this record that proudly takes chances, offering up both musical arrangements and lyrics that stand out from almost everything else currently out there.  That is obvious in the album’s lead single ‘Wristband.’  It is just one example of what makes this record such an interesting listen.  ‘In A Parade’ is another of the album’s more standout moments, exemplifying just as much what makes this record stand out.  “The Riverbank’ can be cited just as much as ‘Wristband’ and ‘In A Parade’ in exhibiting what makes Stranger To Stranger such an interesting new offering from one of music’s greatest names.  That is not to ignore any of the album’s remaining compositions, either.  All things considered, Stranger To Stranger proves to be a record that should be no stranger to any of Simon’s fans.

Paul Simon’s new record Stranger To Stranger is a record that should be no stranger to any of Simon’s fans.  That is because as with each of his previous albums, it proudly takes chances, offering up a collection of songs that stand out from almost anything else out there today if not everything.  The album’s lead single ‘Wristband’ is just one of the album’s songs that makes it stand out so much.  The song’s bass-driven musical arrangement, electronics, and clapping conjure thoughts of a modern-day hipster poetry club; like a cross between something that one might see in Mad Men and one of its modern-day descendants.  The same applies to Simon’s own vocal delivery.  The combination of each of those elements in this song makes its arrangement one that audiences will most definitely struggle to compare to any of today’s major To 40 hits.  That is a very good thing.  It’s not the song’s only positive, either.  The song’s lyrical content, speaking of Simon’s vocal delivery, is just as important to note here as its musical content.  Simon is apparently singing here of a performer who apparently accidentally got himself locked out of the venue where he was set to perform, and the trouble he faced trying to get back in.  This can be concluded as he sings in the song’s opening verse, “I stepped outside the backstage door to breathe some nicotine/And maybe check my mailbox/See if I can read the screen/And I heard a click/The stage door lock/I’m gonna have to walk around the block if I wanna get in.”  He goes on to sing in the song’s second verse about the performer having to face security at the door, who apparently doesn’t recognize him, and thus refusing to let him in. “I can’t explain it/I don’t know why my heart beats like a fist/When I meet some dude with an attitude saying, “Hey you can’t do that. Hold this/And the man was large/A well-dressed 6 foot 8/And he’s actin’ like St. Peter standing guard at the Pearly Gates/Sayin’ you got to have a wristband.”  The story gets even funnier as Simon goes on to present the performer trying to explain that he was with the band.  The story goes on here to seemingly change subjects about the haves and have-nots interestingly enough.  The whole of the story presented in the song’s lyrical content is in itself more than enough reason for audiences to hear this song.  It stands out quite noticeably to say the very least.  Together with the song’s musical arrangement both elements make ‘Wristband’ clearly one of Stranger to Stranger’s most notable compositions.  It is just one of the songs included in this album that shows why STS (as it will henceforth be called) is a record that should be no stranger to any of Simon’s fans.  ‘Clock’ is another standout inclusion in this record.

STS offers audiences plenty to appreciate both musically and lyrically.  That is exhibited clearly in the album’s lead single ‘Wristband.’  That song is just one example of what makes STS stand out in this year’s field of major music releases.  ‘In A Parade’ is yet another example of what makes this record so notable.  That is due in part to the song’s musical content.  Its samba style arrangement instantly conjures thoughts of Rio de Janeiro’s famed Carnival festivities, including its associated parades.  It is an infectious arrangement that is certain to have listeners on their feet.  The song’s lyrical content will catch listeners’ ears just as much as its musical arrangement.  That is because of just how abstract the song’s lyrical content proves to be.  The verses are presented in a sort of spoken word style while the chorus is sung.  In the song’s lead verse, the song’s subject is noting that “Some nights the ER is as quiet as an EKG” and that “tonight it feels like every broke bone/Tonight it feels like every wounded soul/Is filling out a form or on the phone.”  He later notes in the song’s second verse, “I drank some orange soda then I drank some grape/I’m aware I couldn’t now/To cover my mistake/My head is a lollipop, my head is a lollipop/My head is a lollipop and everyone wants to lick it/I wear a hoodie now so I won’t get a ticket/I write my verse for the universe/That’s who I am.”  To say that these lines are abstract would be an understatement.  Even the song’s chorus, in which Simon makes note of “Diagnosis: schizophrenia/Occupation: Street Angel” don’t offer a lot of clarity for listeners.  As wildly out there as all of this seems, it actually is a good thing in its own right.  That is because of the certainty that it will generate discussion among listeners.  That is especially the case when the song’s lyrical content is set against the infectious grooves of the song’s musical arrangement.  When the two elements are combined, they show clearly why this song is yet another of the most stand out compositions included in Simon’s new album.  It still is not the last of the album’s most notable songs, either.  ‘The Riverbank’ is one more example of what makes STS such a notable new album both from Paul Simon and among this year’s new musical offerings overall.

‘Wristband’ and ‘In A Parade’ are both key examples of what makes Paul Simon’s new album stand out both in its own right and among the rest of this year’s new albums so far.  They are not the only compositions included in this record that exemplify its notoriety.  ‘The Riverbank’ is yet another example of what makes STS stand out.  As with the previously noted compositions this is in part due to the song’s musical arrangement.  This song’s musical arrangement stands out just as much from its counterparts on the record as they do from one another.  It is founded largely in a slightly blues-style guitar riff that stays steady throughout the song’s four-minute plus run time (4:12 to be exact).  That riff is complimented by the gentle drive of a shaker and hand clapping in the background along with the occasional inclusion of a triangle at points.  Each piece makes the song’s musical arrangement one that is just infectious in its own right as the arrangement presented in ‘In A Parade.’  The same applies in comparing it to other arrangements presented throughout the record.  It is just one part of what makes the song stand out, though.  The song’s lyrical content is just as important to its presentation as its musical arrangement.  That is because it is just as certain to create its own share of discussion among audiences.  He sings in the song’s lead verse, “Frightened by the tone of a phone in the dead of night/Then staring into darkness and praying to the morning light…now the sorrowful parade to the riverbed/Must be half the county come down to the riverbed/Ask who lives close save for the local police/Shall we tearfully embrace/Shall we sing amazing grace…army dude only saw nowhere to run/Only turns to the gun/It’s a cross/It’s a stone/It’s a fragment of bone/It’s a long walk home from the riverbed.”  That’s just the song’s lead verse, too.  There’s a lot going on here.  The song’s second verse will leave audiences listening just as closely as its lead verse.  When it’s all said and done one can’t help but wonder if Simon is trying to make a certain socio-political commentary since the chorus mentions the soldier and his predicament in each reprise.  Whether or not that is the case, the song’s lyrical content is still certain to create its own share of discussion among audiences.  That being the case, that discussion, coupled with the enjoyment of the song’s musical arrangement, makes this song stand out just as much ‘Wristband,’ ‘In A Parade’ and any of the album’s other songs not noted here.  All things considered, Stranger To Stranger proves in whole to be a record that should be no stranger to Paul Simon’s fans.

Stranger To Stranger is a record that should be no stranger to Paul Simon’s fans.  That is evident in all three of the songs noted here.  Each song stands out from the others both musically and lyrically.  The same applies just as much to the album’s songs as the compositions noted here.  That is just the beginning of what makes the album stand out.  The album stands out in comparison both to his own previous records and the rest of this year’s new albums.  That is because it proudly takes chances yet again.  That is something rare to see in today’s mainstream records but far more familiar with Simon’s records.  Keeping that in mind, this record offers plenty for audiences to appreciate.  In turn it becomes a record that, again, should be no stranger to Paul Simon’s fans.  It is available now in stores and online.  More information on Stranger To Stranger is available online now along with all of Paul Simon’s latest news at: