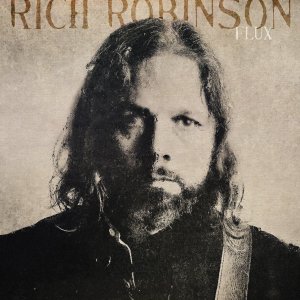 Rich Robinson has been quite busy ever since he and his now former Black Crowes band mates parted ways last year.  He re-issued a number of his previous recordings this year.  And just last week he released his latest full-length studio recording Flux.  His fourth full-length studio recording it is yet another offering that both Black Crowes fans and Robinson’s fans will appreciate.  That is thanks to the variety of sounds presented in the album’s musical arrangements and its equally ear-catching lyrical content.  Both elements are important within the course of each song.  Collectively though, they make the whole of this 13-song set an experience that is another impressive effort from Robinson.

Rich Robinson’s new full-length studio recording Flux is yet another offering that his own fans will appreciate just as much the Black Crowes fans out there.  It is a record that, in whole, is another impressive effort from Robinson.  One example of what makes the record such an impressive new effort from Robinson is the record’s fourth entry ‘Everything’s Alright.’  In examining the song’s musical content, drummer Joe Magistro’s steady, pulsing four-on-the-floor rhythm serves as the song’s foundation.  Matt Slocum strengthens that foundation even more with his work on the keys.  Robinson’s vocal delivery is the finishing touch to the song’s musical arrangement.  It really stands out here both with and without the added distortion in the song’s verses.  The combination of those elements gives the song in whole a sound that Black Keys fans will appreciate.  It is a sound that even with that roots rock sound, really stands out from the rest of the songs on this record.  Of course the song’s musical content is just one layer of the song.  It also boasts lyrical content that will catch listeners’ ears just as much.  He sings in the song’s lead verse, “Yeah, darling my constellation/Do you bring hope for oppression/I can see my midnight sky/What is this you’re bringing/What is this you’re meaning?/I guess it’s not for me to know/Either way you’re a sight to see/Either way you’re beautiful/But what is this you’re bringing/What is this you’re meaning?”  He goes on to sing in the song’s second verse of great, positive vibes with mentions of mythical ships and reeds beneath the trees (or so this critic seemed to interpret without a lyrics booklet).  Through it all the underlying message of positive energy flowing from person to person is ever-present.  This includes the song’s chorus in which Robinson sings along the equally talented Daniella Cotton, “And I feel/I can feel/The stars are aligning for to bring me life/And I/I can feel your head on me/Moving closer to mine/And I/I can feel the love that grows and will give me sight/And I/I can feel it’s alright/Everything is alright.”  Simply put the song’s lyrical content is one of optimism.  It is a message that the world needs more than ever today.  That message couples with the song’s equally upbeat musical arrangement to make it a clear example of what makes Flux such an impressive new offering from Robinson.  It also reveals the song to be one of the album’s best compositions.  It isn’t the album’s only standout song, though.  ‘Which Way Your Wind Blows’ is another one of this record’s truly standout compositions.

‘Everything’s Alright’ is a clear example of what makes Flux such an impressive new offering from Rich Robinson.  That is due to the song’s upbeat musical arrangement, which stands out in its own right from the rest of the album’s compositions, and the song’s equally optimistic lyrical content.  Each element is important in its own right to the song in whole.  Collectively though, the pair make this song a clear example of what makes Flux stand out.  They also combine to make the song itself stand out as on of the album’s best songs.  It isn’t the album’s only standout composition, though.  There are plenty of other notable compositions featured in this album including ‘Which Way Your Wind Blows.’  This song stands out just as much from ‘Everything’s Alright’ just as much as it does from everything else featured in this record.  That is due in part to the song’s bluesy musical arrangement.  Listeners will be interested to learn that Robinson handled not only the guitars and vocals on this song but also bass and some of the song’s percussion.  Magistro handled the remainder of the song’s duties on drums and percussion.  The duo gels smoothly throughout the song.  Of course the fact that Robinson himself manned the boards for this record didn’t hurt either.  While the duo’s work (and that of Matt Slocum on keys) does plenty to make this song another example of what makes the song (and Flux in the bigger picture) stand out, it isn’t all that makes it stand out.  The song’s lyrical content is just as worth noting as its musical arrangement.  Robinson sings here, “Hey you/Runnin’ down that wall/Who ya’ sneaking’ from/Who ya’ scared of/The Captain thought you showed/You showed it all/Are you aware my friend/Are you feeling tall/There’s no one that will tell you/What you need to see/You understand my sound/Get your burden out/Fly….the only way you leave/Call it destiny.”  He goes on to sing in the song’s second verse, “And I will be standing/Right beside you/And walk away from/We’ll walk away from/And I know/That you don’t really want to/Stop the tear down/Stop the tear down.”  From there, the song repeats its chorus before finishing off in full musical fashion sans lyrics.  Keeping this in mind Robinson leaves plenty of room for discussion in regards to this song’s lyrical content.  That isn’t a bad thing, though.  It just means that it gives even more reason for listeners to hear the song.  In hearing the song listeners might not agree fully on the story or message behind the song’s lyrics, but they will agree that its musical arrangement truly stands out in its own right.  The two elements together make this song stand out just as much as ‘Everything’s Alright’ and any of the album’s other songs.  It also shows just as much why Flux is such an impressive new offering from Rich Robinson.  It is still not the only remaining example of what makes Flux such an impressive return for Robinson, either.  The album’s closer ‘Sleepwalker’ stands out just as much as ‘Everything’s Alright’ and ‘Which Way Your Wind Blows’ if not more.

‘Everything’s Alright’ and ‘Which Way Your Wind Blows’ are both key examples of what makes Flux an impressive new offering from Rich Robinson.  That is because both songs stand out from each other and from the rest of the songs included in this record.  This is due to both the songs’ musical arrangements and their lyrical content.  They are just two examples of what makes Flux such an impressive new effort from Robinson.  The album’s closer ‘Sleepwalker’ stands out just as much as those songs if not more so.  As with those songs the main reason for that is the song’s musical arrangement.  It starts out in very surprising fashion with a massive wall of sound from Robinson and his fellow musicians.  That wall of sound ultimately proves deceptive, though as it then leads to a much more mellow sound that is akin to an arrangement that one might expect from King’s X.  King’s X in the same mention of Rich Robinson?  Believe it or not.  Robinson himself even conjures thoughts of King’s X guitarist Ty Tabor both with his own work on guitar and his vocal delivery.  His work on the song’s bass line compliments the guitar line quite well, too.  The song’s musical arrangement is just one part of its whole.  The song’s lyrical content hints at encouraging listeners to think for themselves. This theme seems to run through the course of the song’s second verse, too.  It is a perfect fit with the song’s musical arrangement.  Together, the two elements make this song a proper finale for Flux and one more prime example of what makes Flux such a welcome return for Robinson.  One would be remiss to ignore the other songs featured in this record.  ‘Music That Will Lift Me’ bears something of a country vibe in its arrangement.  And its lyrical content is just as uplifting as the song’s title hints.  The album’s opener ‘The Upstairs Land’ boasts a roots rock style’ that fans of Robinson’s work with his Black Crowes band mates will enjoy.  And ‘Eclipse The Night’ will take listeners right back to the golden era of the 1960s with its sound.  That still isn’t all of the album’s featured songs either.  There are seven other songs not noted here.  Those songs, when partnered with the rest of the songs noted here, make an album that is potentially one of the year’s top new rock records if not overall records.

Flux, Rich Robinson’s fourth full-length solo record, is potentially of the year’s top new rock records if not overall records.  That is due to the variety of musical styles exhibited over the course of its thirteen compositions.  The songs’ lyrical content is just as important to its presentation as its musical arrangements.  The two elements join together in this record to make it a presentation that both Black Crowes fans and Rich Robinson fans alike will appreciate.  They join together to make the record, again, potentially one of the year’s top new rock records and if not overall records.  It is available now in stores and online.  More information on Flux is available online now along with Robinson’s latest news and more at: