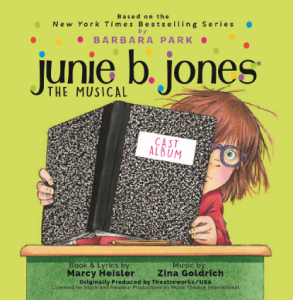 Author Barbara Parks’ Junie B. Jones books are among the most beloved works in the world of children’s literature today.  They are to children today what perhaps author Beverly Cleary’s Ramona series was to this critic’s childhood generation – so it makes sense that considering the success of Parks’ books, they would be translated from the page to a bigger stage.  In the case of Parks’ beloved character, the stage in question was that used by thespians in theaters nationwide some years ago and has run strongly ever since.  An hour-long Broadway Junior ™ performance for middle-school students will make its debut this spring.  Before that performance makes its debut, Next Decade Entertainment, Inc. will release a special cast recording of the Junie B. Jones’ stage presentation on CD.  It goes without saying that there is plenty to appreciate about this recording beginning with its featured highlights.  That will be discussed shortly.  The varied musical styles presented throughout the 15-song, 30-minute “soundtrack” are just as important to note here as the featured highlights.  That will be discussed later.  The work of the show’s cast, as presented here, rounds out the recording’s most important elements.  Each element is important in its own way to this recording.  All things considered, Junie B. Jones: The Musical – Cast Album proves to be a recording that audiences of all ages and types will enjoy.

Junie B. Jones: The Musical – ­Cast Album is a fun glimpse into the hugely popular stage adaptation of author Barbara Parks’ equally popular literary series.  While not the musical’s full recording, it is still a recording that audiences of all ages and types will enjoy.  That is due in part to the highlights featured in the recording.  The highlights include Junie meeting a new friend on the ride to school on her first day of first grade, the revelation from Junie’s new teacher that she might need glasses, the fun of a kickball game and lots more.  Throughout it all, Junie learns some very important life lessons.  Those lessons are made easily accessible for the play’s young audiences, too.  That is thanks to the work of the play’s award-winning songwriting team of Zina Goldrich and Marcy Heisler.  Goldrich and Heisler’s musical arrangements and lyrics do their own part in making the story believable. Veteran actress and thespian Lori Casteel does just as much in her portrayal of Jones to make the story (and Junie) believable.  Her work will be discussed later.  Getting back on the topic at hand, the highlights that are presented in this recording are more than enough to entertain audiences who might not be lucky enough to experience Junie’s first day of first grade live.  At the same time, those who have experienced the musical in person will enjoy this recording just as much as those who haven’t seen the show.  That being said, the highlights featured in this recording are key in their own way to the recording.  Collectively speaking, they are just one of the recording’s key elements.  The varied musical styles presented throughout the half-hour recording are just as important to note in examining this recording as its featured highlights.

The highlights of the Junie B. Jones musical featured in the show’s new cast album are, collectively speaking, are important in their own way to the recording’s overall presentation.  They are not its only key element.  The varied musical styles presented throughout the half-hour record are just as important to note in examining this recording as the musical’s highlights.  The record starts off with something of a poppy doo-wop style arrangement in ‘Top Secret Personal Beeswax.  The horns, guitars and drums couple with full on backing chorus to make this catchy number a fun composition.  Jones’ declaration as she writes, that what she writers is her own personal beeswax adds even more enjoyment.  Again that is due to Casteel’s work.  She makes Junie so believable as she sings.  The march-style arrangement presented in ‘Sheldon Potts’ Halftime Show’ is another example of the importance of the record’s musical styles.  It is a full-on march arrangement that instantly conjures thoughts of a marching band, which of course is the intended effect.  What’s more, being that this is a musical, audiences familiar with their musical history will get images of scenes from The Music Man, too.  That probably wasn’t the intent in developing the song’s arrangement and lyrics, but it does happen.  In turn, it becomes just one more example of what makes the musical styles presented in this record so important to its presentation.  The semi-Dixieland style arrangement at the center of ‘When Life Gives You Lemons’ is yet another example of the importance of the show’s varied musical styles.  Its arrangement conjures thoughts of songs crafted both by legendary musician Dr. John and equally well-known composer Randy Newman.  Between that arrangement and the record’s other arrangements (both noted and not), it becomes clear that the arrangements presented throughout this record are just as important to its presentation as its highlights.  Even with the variety and reach that they display, the arrangements presented here are not the record’s last important elements to note.  The work of the show’s cast in each song is just as important to note as the songs’ varied arrangements and the show’s highlights.

The highlights presented throughout this recording and the equally varied musical arrangements presented throughout the Junie B. Jones: The Musical – Cast Album are both key in their own way to the recording’s presentation.  The highlights paint a wonderful, thorough picture of the story presented on stage.  The recording’s various musical styles and their arrangements are just as important to note as the show’s featured highlights.  While both elements are important in their own way to the recording, they are just two of its key elements.  The work of the show’s cast rounds out its most important elements.  Given, the cast is all adult.  Yet even being grown-ups, there is something about the group’s performances that makes each actor wholly believable.  That is rare especially in this day and age whether on the stage or on TV, but somehow the cast pulls it off here.  The way in which the performers present their lines makes each performance translate so well even in an audio-only setting, too.  That is a tribute to their work as well as those responsible for the show’s audio engineering.  When this outstanding element is set alongside the recording’s various musical styles and its featured highlights, the end result is a recording that is just as enjoyable as experiencing Junie B. Jones: The Musical in person.  They combine to make this recording a musical experience that audiences of all ages and types will enjoy.  With any luck, it will also serve to be just the first of a lifetime of musical experiences for its intended youthful listeners.

Junie B. Jones: The Musical – Cast Album is the next best thing to experiencing the long-running stage presentation for audiences of all ages.  With its wonderful highlights, its equally enjoyable varied musical styles and arrangements, and its award-worthy performances by its cast, this recording is certain to entertain any listener.  With any luck, the combination of those elements will make this recording just the first in a lifetime of musical experiences for its intended youthful audiences.  It will be available next Friday, January 13 in stores and online courtesy of Next Decade Entertainment.  More information on this record is available online now along with lots of Junie B. Jones games, activities and more at: