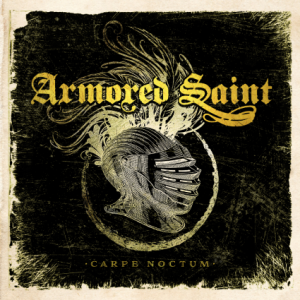 Metal Blade Records had quite a year in 2016, putting out impressive new recordings from Amon Amarth, Wovenwar, Artillery and a number of others.  One of the leading labels in the metal community, Metal Blade has wasted little time in 2017 getting things going.  It will open the new year late next month with the release of Armored Saint’s new live recording Carpe Noctum.  The eight-song, 38-minute recording isn’t necessarily a career-defining collection of songs, but is still impressive in its own right.  It is just one of the elements to note in examining the recording’s overall presentation.  The band’s stage presence is just as important to note in examining the recording’s presentation as its set list.  Considering that the recording will seemingly only be released on CD, its audio mix rounds out its most important elements.  Each element is important in its own right.  All things considered, Carpe Noctum proves to be a recording that Armored Saint fans new and old alike will appreciate.

Armored Saint’s latest live recording Carpe Noctum is a collection of live performances that fans new and old alike will appreciate.  The eight-song, 38-minute recording will be released in stores and online Feb. 24 via Metal Blade Records.  The main element to be examined in this recording is its set list.  The set list takes audiences all the way back to the band’s 1984 debut full-length album March of the Saint and all the way up to the band’s most recent album Win Hands Down (2015).  Along the way, three more of the band’s nine total albums are represented here.  The albums in question are its 1985 sophomore record Delirious Nomad, its 1991 album Symbol of Salvation and its 2010 record La Raza.  According to Metal Blade Records’ summary description of the set list, it appears the set list was pulled from Armored Saint’s set at the 2015 Wacken Open Air Festival and its headlining show at Aschaffenburg, Germany.  In other words, the set list presented here is not one complete concert, but seemingly a collection of performances from two separate concerts.  That would likely account for why the recording features such a limited number of songs in its defense.  This is a good thing in its own right, too.  That is because it provides audiences a more diverse representation of the band’s live show.  Again, fans new and old alike will appreciate this aspect of the recording.

Carpe Noctum’s 8-song, 38-minute set list is an important piece of the recording’s overall presentation.  That is because while not necessarily career-defining, it does at least present some highlights from the band’s extensive span of records.  It also provides audiences a relatively diverse representation of the band’s live show.  That is because it allegedly pulls from not one but two of the band’s live shows.  While the recording’s set list is clearly an important piece of its whole, it is only one of the pieces of the recording that should be considered in examining the recording’s overall presentation.  The band’s performance of said songs is just as important to note as the songs themselves.  Audiences will note in taking in these performances that the band’s members largely let their performances do the talking for them.  Since this recording is only available on CD, it is difficult to know if the songs presented here were presented in the same order as in the original performances.  There could have been some interaction with the audience between songs at those performances.  Again, that can’t be determined here.  That aside, the band members’ performances do plenty to keep listeners’ engaged.  Front man John Bush commands the stage with each performance, his pipes in prime condition.  Drummer Gonzo Sandoval keeps the band moving in each song with his solid time keeping.  The dual guitar approach of Phil Sandoval and Jeff Duncan adds even more depth to the band’s stage presence.  Of course one would be remiss to ignore bassist Joey Vera’s work on the low end.  Each band member’s performance in itself plays its own critical part to the whole of the performances. They cut through solidly throughout the recording, too.  Altogether, the band members’ performances prove to be just as enjoyable here as the concert’s set list itself.  One can’t help but hope Metal Blade Records will release the concert on DVD and/or Blu-ray, though.  One would be safe assuming those performances would hold even more significance when able to be seen and heard, and not just heard.  Even with that in mind, the band’s overall performances throughout the recording still proves to be just as important to the recording’s presentation as the sets’ featured songs.  While the band members’ performances prove to be just as important to the recording’s presentation as the recording’s featured set list, neither element would be worth discussing without mention of the concert’s audio mix.

Armored Saint’s upcoming live recording Carpe Noctum is a collection of live performances that fans new and old alike will appreciate.  That is due in part to its 8-song, 38-minute set list.  The set list isn’t necessarily a career-defining collection of performances.  It only pulls from five of the band’s nine total full-length studio recordings.  However, it does go all the way back to the band’s 1984 debut record and up to the band’s most recent album, 2015’s Win Hands Down.  The set list also allegedly pulls from not one but two of the band’s recent live shows.  The band’s performance of the featured songs is just as enjoyable as the songs themselves.  The audio engineering presented in the recording forms its foundation.  It balances each of the band members’ parts and handles the settings in which the performances were held just as expertly.  Each element is important to note in its own right, as has been noted.  All things considered, they show, once again, that this latest live recording from Armored Saint is a collection of live performances that Armed Saint fans old and new alike will appreciate.  It will be released Feb. 24 in stores and online via Metal Blade Records.  More information on Carpe Noctum is available online along with all of the band’s latest news and more at: