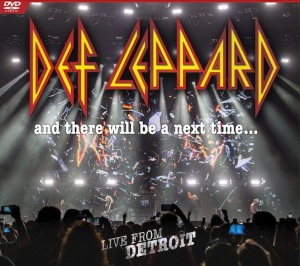 Def Leppard is one of the biggest bands from rock’s big hair era.  While so many bands from that age have gone by the wayside, this hard-working band has continued to make new music and tour the globe year after year; its 11th album being released in 2015.  The self-titled record proved to be a big hit for the band around the world, reaching #10 on Billboard’s Top 200 New Albums Chart and reaching the top spot on the magazine’s Top Rock Albums Chart, Top Hard Rock Albums Chart, and Top Independent Albums Chart.  It also led to a hugely successful global tour in support of the record.  That tour included a performance in Detroit in 2016 that this week was released by Eagle Rock Entertainment on multiple formats.  Releasing the recording on multiple formats is standard practice for Eagle Rock Entertainment, so there is little point to noting this as part of its overall presentation.  The concert’s set list sits at the center of the recording’s presentation.  It will be discussed shortly.  The band’s performance is just as important to note as the show’s set list.  The concert’s companion booklet rounds out its most important elements.  Each element is important in its own right.  All things considered, the recording in whole proves to be a presentation that Def Leppard’s most devout fans will enjoy.

Def Leppard’s new live recording And There Will Be A Next Time is a recording that the band’s most devout fans will enjoy “time and again.”  Yes, that awful pun was entirely intended.  While it obviously is not the band’s first ever live recording, it is still a recording that those fans will enjoy.  That is due at least in part to the recording’s set list.  The 17-song set is not wholly career-defining.  That is because it doesn’t pull from every one of the band’s albums.  The most heavily represented album in this concert is the band’s 1987 album Hysteria.  The band pulled six songs from the record. They include the hit songs ‘Love Bites,’ ‘Pour Some Sugar On Me,’ and the record’s title track.  High and Dry (1981) and Pyromania (1983) are the next most prominent records featured in this set with three songs each.  Adrenalize (1992), Yeah (2006) and the band’s 2015 self-titled record are all included in the show’s set list with songs from each record, too.  While X, Euphoria, Slang and Songs From The Sparkle Lounge are all absent from the set list, that doesn’t necessarily take away too much from the concert.  The band might have been limited by time constraints set by the DTE Energy Music Theatre staff.  There are a lot of venues that have time constraints in place.  Considering that, it likely limited the band’s ability to include songs from every one of its albums.  If that was the case, then what the band was able to present will no doubt impress audiences and the band’s most devout fans.  It is just one of the elements of this concert that audiences will appreciate.  The band’s performance of the featured set list is just as worth noting as the songs themselves.

The set list featured in Def Leppard’s new live recording is in itself a key piece of the recording’s presentation.  That is because while not necessarily career-defining, it does still present a respectable cross-section of the band’s body of work.  That is just one of the recording’s most important elements.  The band’s performance of that set list is just as important to note as the set list itself.  Audiences will note in watching this performance that the stage at the DTE Energy Music Theatre is not overly large.  It is not one of those massive arena stages on which the band made its name during its heyday.  It is, in fact, about the same size as most outdoor amphitheatre’s stage.  That being the case, the front man Joe Elliot and company don’t have a lot of room to move around.  The band made up for that lack of space with its own enthusiasm in each song’s performance.  The passion put in by each band member in each song makes it clear why this band is still a fan favorite for such a long time.  From Elliot’s still strong vocal delivery and guitarists Phil Collen and Vivian Campbell’s concrete playing, the band makes the best of what is clearly a tough situation, making for a performance that is still enjoyable regardless.  Of course one can’t ignore the work of longtime drummer Rick Allen and bassist Rick Savage here, either.  Between their work and that of their band mates, it is clear in watching the whole group that its collective performance will impress fans just as much as the show’s set list.  It is still not the last element to note in examining this recording, either.  The recording’s companion booklet rounds out its most important elements.

And There Will Be A Next Time, Def Leppard’s latest full-length live recording is a recording that the band’s most devout fans will appreciate just as much as its more casual fans.  As noted above, that is due to a set list that represents relatively well, the band’s body of work and a performance thereof that makes the best of a seemingly tight setting.  The companion booklet included in the recording’s packaging paints a clear picture of why the band is still such a fan favorite especially in a live setting so many decades after its formation.  Each element is important in its own way to this recording.  All things considered, they make this recording one that audiences will enjoy “time” and again.  It is available now in stores and online.  More information on this recording is available online now along with all of the band’s latest news and more at: