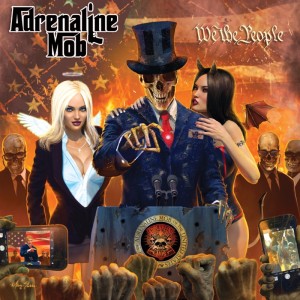 Adrenaline Mob is giving audiences their first taste of its new album, and it’s doing it in a big way.

The band debuted the video for the song ‘King of the Ring’ this week via Loudwire.  The song is the lead single from the band’s upcoming album We The People, which is available for pre-order now via multiple outlets here.  The album is currently scheduled to be released Friday, June 2 via Century Media Records.

The video, shot in Long Island, NY and directed by Ron Cote, is a classic style work that features the band performing its new single in a studio setting established to look like a live setting.   It serves as a first introduction for new band members Dave Z (bass) and Jordan Cannata (drums).

The song itself is a heavy, guitar-driven composition that makes for a solid first impression for the band’s new album. It is meant to deliver a message about overcoming all obstacles and is streaming online now via Spotify.  Considering this and the song’s title, it would be no surprise if it becomes an anthem for any of World Wrestling Entertainment’s upcoming pay-per-views.

Adrenaline Mob will hit the road this summer in support of We The People with an extensive North American tour beginning June 16 in Poughkeepsie, NY. The nearly two-month-long tour also includes dates in North Carolina, Idaho, Pennsylvania and many other cities.  The tour’s current schedule is noted below.