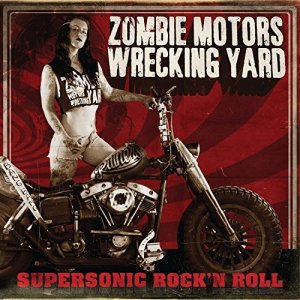 Zombie Motors Wrecking Yard’s debut album Supersonic Rock ’N Roll is a good start for the Australian hard-rock outfit.  However it is not as super as its title leads listeners to believe.  Even with that in mind, listeners should know that while not a total success, it is also not a total loss.  That is thanks in part to the musical arrangements presented throughout the course of the album’s 10 songs.  This will be discussed shortly.  For all of the good that those arrangements do for this record, the album’s sequencing detracts from the record’s presentation just as much.  This will be discussed later. Even as much as the record’s sequencing hurts its overall presentation, its mixing and production make up for that negative, coupling with the arrangements directly to make the album a work that, in whole is still worth an occasional listen.

Zombie Motors Wrecking Yard’s debut album Supersonic Rock ‘N’ Roll is not the best hard rock album to be released so far this year, but it is still an enjoyable start for the Australian-based hard rock outfit.  That is because over the course of its 11-songs it completely destroys its competition.  That is made evident first and foremost through the songs’ musical arrangements.  The songs’ arrangements take the best elements of Motorhead, Clutch and Pantera, mixes them with a healthy dose of stoner rock sounds for a whole that ensures listeners’ maintained engagement.  ‘Dead Smile,’ which comes very early in the album’s sequencing solidly supports that comparison thanks to the vocal delivery of the band’s front man “Mark” and the song’s dual guitar attack.  “Mark’s” vocal delivery instantly conjures thoughts of Motorhead front man Lemmy Kilmister while the song’s guitar attack just as quickly conjures thoughts of Clutch’s finest riffs.  On another note, the arrangement at the center of ‘Bad Boy Benny’ mixes elements of Clutch with AC/DC for a sound that will keep listeners just as engaged as ‘Dead Smile.’  It is much more down tempo than ‘Dead Smile’ (much like the majority of the record’s second half—this will be discussed later), but is no less heavy in its presentation.  To that end, that it is still an impressive composition in its own right, and shows again why the record’s musical arrangements are so important to the record’s overall presentation.  ‘Grind The Grinder,’ the record’s opener is one more example of why its musical arrangements are so important its overall presentation.  The song’s powerhouse guitar riffs and vocals couple with the song’s vocals to create a composition that is one part Pantera, one part Motorhead, one part Clutch and all rock and roll.  The rest of the songs featured throughout the record are musically similar to the works noted here.  Al things considered, they proves the record’s overall content to be the backbone of its presentation.  While the record’s content proves to be solid throughout, its sequencing sadly is not as solid.

The musical arrangements presented throughout the course of Supersonic Rock ‘N’ Roll’s body collectively create a solid foundation for its presentation.  That is thanks to the fact that the arrangements take the best of so many stoner and hard rock acts that have come before and melds them into one.  The end result is 10 songs that clearly pay homage to ZMRY’s forebears while also creating the band’s own musical identity.  While the record’s musical arrangements are impressive, the sequencing of those arrangements is not as impressive.  As many other critics have already pointed out, the album’s first half is a full-throttle (bad pun fully intended) rock and roll ride.  However, the record’s second half, while still heavy in its own right, is much slower than the first half.  The reason that this is so problematic is that the change in style is so sudden.  Varying the songs’ energy throughout the record’s 31-minute run time would have been far wiser than taking the course of action presented here.  That is the case even with the album ending on the same upbeat tempo on which it started.  That lack of variance in the songs’ energies is ultimately a major detractor to the record’s presentation.  It makes the record a good start, but far from super or even supersonic.  Even as much of a problem as the album’s sequencing proves to be for its presentation, it is not enough to make the record a total loss.  The album’s mixing and production couple directly with the album’s musical arrangements to make it an album that is worth an occasional listen.

The overall sequencing used for Supersonic Rock ‘N Roll’s body is a negative that cannot be ignored in examining the album’s overall presentation.  One can’t help but wonder who made the final choice in deciding the final ordering of the album’s songs.  As much of a problem as this poses, it does not make the album a total loss.  The album’s production and mixing couple directly with its arrangements to make the songs overall well worth the listen.  At no point throughout the songs do any of the separate parts overpower one another. Given, sometimes the song’s vocals get muddied and lost a little bit within the music, making understanding what is being said a little difficult.  However, this never becomes too much of an issue.  Again, the same can be said of the other parts throughout each song.  Those behind the boards are to be commended for their attention to each part’s power.  It is thanks to their work that the record’s full impact is felt from start to finish (again despite the sequencing).  Bringing everything full circle, that wise work finishing each song is what brings out the influences of the bands which this fledgling band emulated.  Taking that into account, the two elements do enough to make up for the record’s not so wise sequencing and make it overall, a record that is well worth the occasional listen by any hard rock purist.

Supersonic Rock ‘N Roll is a good start for Zombie Motors Wrecking Yard.  However, it is not super or supersonic.  It is not a total loss, though.  Powerful musical arrangements that channel the likes of Motorhead, Pantera, Clutch, and even AC/DC couple with production and mixing that expertly brings out those influences.  Their coupling makes up for sequencing which was anything but wise.  All things considered, while the record was a good start for the Australian-based band, it shows there is still room for growth, which gives some hope for the band’s future.  Supersonic Rock ‘N Roll is available now.  More information on this record is available online now along with all of the band’s latest news and more at: