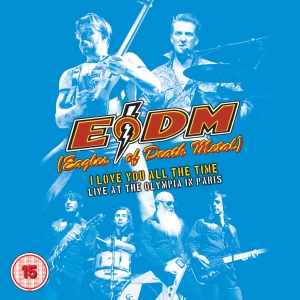 Eagle Rock Entertainment and Eagles of Death Metal have partnered to release a very special new live recording from the band.

I Love You All The Time – Live at the Olympia in Paris will be released Aug. 4, 2017. Originally recorded Feb. 16, 2016 at the Olympia Hall, the concert was the band’s tribute to those who lost their lives during the band’s performance at the Bataclan Theatre on Nov. 13, 2015, only months prior to this concert. Audiences can check out a clip of the concert online now here.

The band’s concert at the Olympia Hall was part of its Nos Amis Tour, and features a number of the band’s biggest hits including ‘Complexity,’ ‘Don’t Speak (I Came To Make a Bang),’ and ‘Cherry Cola,’ ‘I Want You So Hard (Boy’s Bad News), a cover of Duran Duran’s ‘Save A Prayer’ and others.  The recording’s full set list is noted below.

Front man and band co-founder Jesse Hughes spoke to the audience before the concert, stressing the band felt finishing the concert that was so tragically cut short in November was the right thing to do. He said the city’s support of the band drove the group to decide it had to finish its previous concert as a way to honor those fans and the fans who lost their lives in that horrible event.

“The people of Paris have always been incredible to us, and our feeling of love toward this beautiful city and its people has been reinforced a million times over this past month,” Hughes said.  “Hearing the stories of the survivors, the injured and those who have lost loved ones has been overwhelming.  Not returning to finish our set was never an option.”

As an additional bonus for fans, the band and Eagle Rock Entertainment have also included a trio of live performances from the band’s Oct. 2015 performance at L.A.’s Teragram Ballroom.  Those performances are of the songs ‘Anything ‘Cept The Truth,’ ‘Bad Dream Mama’ and ‘Shasta Beast.’  These bonus clips are not included in the recording’s 2CD platform.

That 2CD platform is just one of the platforms on which the recording will be made available.  It will also be available on DVD and digital video/audio platforms through UMe.

More information on I Love You All The Time – Live at the Olympia Paris is available online now along with all of Eagles of Death Metal’s latest news and more at: