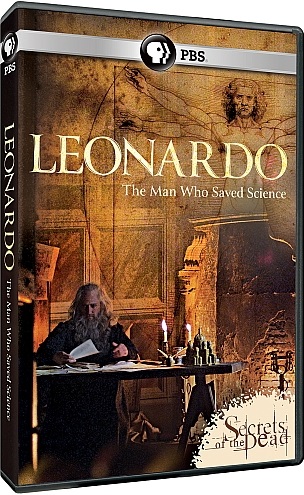 Leonard Da Vinci is considered around the world to be one of the most important figures in the realms of art and science.  His paintings are revered as masterpieces.  His inventions are said to be creations of a genius mind.  However his inventions may in fact not be entirely his as is argued in a new episode of PBS’ hit history-based series Secrets of the Dead.  Secrets of the Dead: Leonardo – The Man Who Saved Science, released on DVD early this month, examines the reality of Da Vinci’s contributions to the scientific community.  That reality is the most important part of the program’s presentation.  It will be discussed shortly.  The re-enactments used to help tell Da Vinci’s story are important in their own right to the program’s whole.  They will be discussed later.  The program’s pacing rounds out its most important elements.  Each item is important in its own right to the program’s whole.  All things considered, they make Leonardo – The Man Who Saved Science a secret worth sharing with lovers and students of science of all ages.

Secretes of the Dead: Leonardo – The Man Who Saved Science is a secret that should be shared with lovers and students of science of all ages.  Released earlier this month on DVD, it paints a picture of Da Vinci (yes, that awful pun was fully intended) that is rarely shown.  It uses new information found in Da Vinci’s own journals to reveal that inventions previously thought to be Da Vinci’s own creations likely were not entirely his.  Rather the program reveals Da Vinci likely took designs from other sources and enhanced them with his own specs.  Those designs included designs for the parachute, the tank and even catapult among so many other inventions.  This is such an intriguing revelation because Da Vinci has been considered a scientific genius responsible for so many of the world’s advances for centuries.  This revelation shows that while he obviously was a smart man, he might not have in fact been the full-on genius that he was previously thought to be.  That is not meant to mean he was not smart.  He clearly was very intelligent.  But the level of his contributions to the scientific community definitely needs to be re-evaluated as is evidenced in this program.  Interestingly enough, the changes that he seemingly made to the pre-existing designs is something that is done in companies worldwide to this day.  To that end, one could argue that Da Vinci’s approach is the model for so many major companies’ employees today.  To that end, one could argue that Da Vinci was a ground breaker in that avenue.  Keeping in mind all of this, the story at the center of this program and its related information ultimately proves to be the program’s most critical element.  It is just one of the program’s key elements.  The re-enactments used to tell the story are collectively just as important to its presentation as the story itself.

The story at the center of SOTD: Leonard – The Man Who Saved Science is the cornerstone of the program’s overall presentation.  It sheds new light on Da Vinci and his contributions to the scientific community.  While clearly important to the program’s presentation, it is only one of the program’s key elements.  The re-enactments used to help tell the story are just as important as the story to the program’s presentation.  That is because they provide a full visual aid for audiences.  It serves to entertain audiences, much like so many other episodes of PBS’ hit series, at the same time that they are being educated.  The re-enactments are once again on the same level as those presented in the documentaries that once made History Channel so respected.  Audiences will enjoy seeing Da Vinci try to convince his assistant take a giant leap of faith with his parachute design early on in the program.  They will enjoy just as much, seeing the wheels spinning in his head as he examined another man’s plans as a young man, thinking how he could improve on them and watching him work on the designs throughout his life.  Between these and other moments, the re-enactments that are used throughout the course of this program add to the depth generated through the story.  They truly do make the story just as entertaining as it is educational.  To that end, they help make the program a success just as much as the program’s central story.  It is not the last of the program’s most important elements, either.  The program’s pacing rounds out its most important elements.

The story at the heart of SOTD: Leonardo – The Man Who Saved Science and the re-enactments used to help tell that story are both important parts of the program’s whole.  That has been made clear in the discussions already noted here.  They are not its only important elements, though.  The program’s pacing is just as important to its whole as those previously discussed elements.  The nearly hour-long program’s pacing is to be applauded as it remains stable from start to finish.  It would have been very easy for the program to get muddled at so many points in the discussion on Da Vinci’s contributions to the scientific community.  The same applies to the discussions on his personal life, as it does focus on that aspect of his life, too.  Instead of letting that happen, it never allows itself to get stuck on either aspect.  This is important to note because that expert balance keeps the program moving forward solidly from start to finish.  The result is a program that will keep audiences engaged and entertained the entire time.  That maintained engagement and entertainment ensures even more retention of the material presented throughout and in turn assures even more audiences’ appreciation for the program.  That appreciation will lead audiences to agree once more that the program in whole is its own enjoyable addition to this year’s crop of new documentaries.

Secrets of the Dead: Leonardo – The Man Who Saved Science is an interesting and entertaining new look at the life and work of Leonardo Da Vinci.  It shows an important part of Da Vinci’s story that has rarely, if ever, been shown.  The re-enactments used to tell that important story deepen the story even more.  The solid pacing from start to finish puts the finishing touch to the program’s presentation.  Each element is important in its own right, as has been already been discussed.  All things considered, they make this episode of Secrets of the Dead its own enjoyable addition to this year’s crop of new documentaries.  It is available now and can be ordered direct online via PBS’ online store.  More information on this and other episodes of SOTD is available online now at: