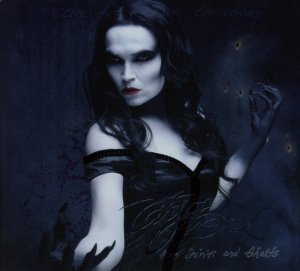 The holiday season is officially upon us once again.  Halloween has come and gone, and now the annual flurry of Christmas ads has hit the airwaves and it won’t be long before the annual overdose of Christmas albums hits stores, either.  From one to the next, those albums exhibit little variance or originality.  Next Friday though, earMusic will offer that rare variance in the always overcrowded holiday music scene when it releases Tarja’s new holiday album from Spirits and Ghosts (Score for a Dark Christmas).  The best way to describe this new effort from the veteran Finnish performer is that it is as if famed goth director Tim Burton ended up manning the boards for a Trans Siberian Orchestra record.  Oddly enough, that actually is not a bad thing in this case.  From start to end, this 12-song record proves to be a solid standout holiday offering even with some of its more goth-style arrangements.

Tarja’s new holiday album from Spirits and Ghosts (Score for a Dark Christmas), is one of the most standout offerings in this year’s annual sea of holiday albums.  That is because its arrangements, while sometimes goth-oriented, actually are quite touching in their attempts to balance Tarja’s goth side with the arrangements’ source material. Her take on ‘We Three Kings’ is a prime example of this balance.  For the most part, this arrangement stays true to its source material.  However, it does add in Tarja’s familiar goth leanings through the use of keyboards (including what sounds like a harpsichord) and electronics.  When those elements are coupled with Tarja’s own soaring vocal delivery, the end result becomes a powerhouse composition that is certain to move even those not the least familiar with Tarja and her body of work.  That is especially the case when those elements are coupled with the fact that the song in large part stays true to the source material.  All things considered, the overall impact is one that easily shows that previously noted comparison to Trans Siberian Orchestra, and makes this entry one of the compilation’s most notable moments.  It is just one of those notable moments, too.  Tarja’s take on ‘God Rest Ye Merry Gentlemen’ is another of those moments.

The arrangement put together for Tarja’s take of ‘God Rest Ye Merry Gentlemen,’ much like that of ‘We Three Kings,’ balances her general goth leanings with the song’s already minor chord arrangement for yet another powerful new take on the song.  Right from the song’s outset, the use of the multiple vocal lines conjures thoughts of some of Celtic Woman’s greatest compositions.  Yes, a comparison to Celtic Woman was just made here.  Just as interesting is the Middle Eastern vibe created from there through the use of what sounds like a tabla, a triangle.  The string arrangements, while creating again that goth vibe, also somehow creates a certain warmth to the song.  That warmth is only increased when it is set alongside the song’s keyboard arrangements and tubular bells.  As with ‘We Three Kings,’ the overall arrangement stays true to its source material, but when it is all joined as one, the end result is a take on a holiday standard that is almost completely unlike any other take on the song out there today or days past.  Considering this, it shows even more why from Spirits and Ghosts is one of the most standout of this year’s annual influx of holiday fare, and is still not the last of the collection’s songs to support that statement.  Tarja’s take on ‘Have Your self a Merry Little Christmas’ is one more of the collection’s most notable covers.

The cover of ‘Have Yourself A Merry Little Christmas’ included in Tarja’s new holiday album is yet one more example of what makes from Spirits and Ghosts such a standout collection of holiday musical fare.  This arrangement, highlighted largely by flowing keyboard lines, emotional accents crafted through cymbal rolls and expertly balanced crescendos and of course Tarja’s own moving vocal delivery, comes across as a work that could easily be used for a big budget holiday movie’s soundtrack.  That should come as no surprise considering the fact that the compilation was produced in part by Emmy Award®-winning film score producer Jim Dooley.  His work, along with that of co-producer Tim Palmer (Pearl jam, U2, David Bowie, The Cure), makes this one of the album’s most powerful works if not the compilation’s most powerful.  When it is set alongside the other arrangements noted here, and those not so directly noted (including the equally powerful but not necessarily holiday-themed take of ‘Amazing Grace), the end result is a collection that is certain to stand head and shoulders above its counterparts this holiday season.

from Spirits and Ghosts is one of the most notable of this year’s holiday offerings.  From start to finish, it offers takes on holiday standards that are almost completely unlike anything presented by its seemingly endless sea of musical holiday counterparts.  That is proven clearly through the songs noted in this review and even through those not noted, including the powerhouse take of the non-holiday-themed ‘Amazing Grace’ and the deeply moving take of ‘Feliz Navidad.’  Considering the world’s current political climate, Tarja’s take on this holiday standard gives it a powerful new identity that is so fitting this holiday season, ironically enough. Considering this and the rest of the record’s other covers, the whole of the record’s presentation makes it stand head and shoulders above its fellow musical holiday counterparts – a record that deserves at least one listen even if one is not familiar with Tarja or her body of work.  It is that powerful overall.  It will be available in stores and online next Friday, Nov. 17.  More information on this compilation is available online now along with all of Tarja’s latest news and more at: