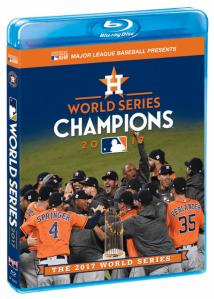 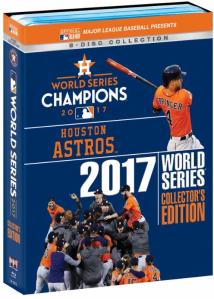 Major League Baseball and Shout! Factory will release The 2017 World Series documentary film and 2017 World Series Collector’s Edition: Houston Astros Tuesday, Dec. 5 on DVD and Blu-ray. the documentary presentation is presented on DVD/Blu-ray/Digital combo pack and follows the Astros’ unlikely post season run to baseball’s top prize, only months after Houston was decimated by mother nature. the story is told through the words of the Astros’ players and footage culled from the regular and post season including the team’s championship parade.

The eight-disc 2017 World Series Collector’s Edition: Houston Astros presents the seven-game World Series between the Astros and Dodgers as well as the team’s pennant-clenching win in the American League Central Series Game 7 at Minute Maid Park. As with MLB’s previous World Series collector’s sets, this set also includes a complete guide that includes the full stats and more for each of the series’ games, right down to the gametime weather and more. The games are also featured once again from the Astros’ radio network, the Dodgers’ radio network and in SPanish-language broadcast.