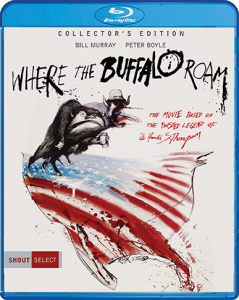 Early this past June, Shout! Factory released to audiences what can only be described as one of the single most outrageous movies that the home entertainment company has ever put out when it made available Where The Buffalo Roam. This semi-biopic focuses on the career of the infamous journalist Hunter S. Thompson. It follows Thompson (played here by comic legend Bill Murray) over the course of the 1960s and 70s, culminating with Thompson following Richard Nixon’s campaign for the presidency. That story is among the movie’s most important elements. Murray’s portrayal of Thompson is just as important to note in examining the movie’s presentation as the story itself. The bonus interview with Thompson’s friend, screenwriter John Kaye, rounds out the movie’s most important elements. Each of the elements noted here is important in its own right to the movie’s presentation. All things considered, they make Where The Buffalo Roam one of the most intriguing cinematic offerings that Shout! Factory has ever released.

Shout! Factory’s release this past June of Universal Pictures’ Where The Buffalo Roam is one of the most significant of the home entertainment company’s releases so far this year. That is because it marked the first time that this take on Thompson’s life and career had been released up to that point. Given, it is not the first Thompson “bio” to be released — Fear and Loathing in Las Vegas (1998) presents another Thompson story — but is still quite the interesting story. the story opens with Thompson writing about his adventures with then lawyer Oscar Acosta during the 1960s and 70s. The pair’s drug and alcohol-fueled adventures play out like a Cheech & Chong movie, only more out there. From getting a hotel staff involved in his own out there football game as he tries to cover the Super Bowl to basically kidnapping a young hitchhiker, leaving the young man think he’s going to be killed, to addressing a group of college students about journalism as he drinks and smokes to so much more, the adventures featured in this story are so uncomfortable and unsettling that one can’t help but watch to see just how outrageous they can become. It is one of those stories that is so rare that it absolutely must be seen to be understood and appreciated. Keeping that in mind, it proves to be a story that is unforgettable and will be talked about for years to come, proving without a doubt its importance to this movie. It is of course, only one of the movie’s most important elements. Bill Murray’s take on Thompson is just as important to discuss in examining this movie as the movie’s story.

Murray’s take on Thompson is just as outrageous to experience as the story at the center of this movie. The lack of balance in Thompson’s personality throughout the movie is at times just as unnerving as the movie’s story, but that is meant in a positive manner. Viewers never know from one moment to the next which side of Thompson is going to come out, right up to the story’s final act. Viewers are left asking at the end if Thompson had finally gotten himself in order as he joins the Nixon campaign as a reporter or was it just one more part of a bigger story. His instability as he checks into his hotel ahead of the Super Bowl and as he trades a set of media passes for a man’s hat is just as entertaining in those moments as so many others. Murray really makes Thompson such an intriguing figure from one moment to the next. On a side note, it is interesting to note that Where The Buffalo Roam made its theatrical debut only months ahead of Caddyshack, another Bill Murray hit flick. Comparing Murray’s character in each movie, one can’t help but notice the similarities in the two men. It leaves one wondering if they played into one another at least to some point. Regardless, Murray’s portrayal of Thompson in Where The Buffalo Roam is still so wildly entertaining that it alone makes the movie worth the watch. Of course it is just one more reason for audiences to take in the movie. The bonus commentary from Thompson’s friend — and the movie’s writer — John Kaye adds its own interest to the movie.

Over the course of his interview, Kaye discusses his friendship with Thompson, noting its up-and-down nature. He notes how apparently there was some trepidation from certain parties about even releasing this movie. It is obvious at some points that Kaye has some upset feelings toward Thompson while at others there is a certain amount of fondness and respect for him. He even begins to tear up in the end of his interview as he discusses Thompson’s suicide in 2005, showing even more that despite the ups and downs of his relationship with Thompson, there was obviously some love for Thompson even as outrageous as he might have been in his life. Between that and so much more discussed during his roughly 15 – 20 minute interview, Kaye offers plenty of insight into who Hunter S. Thompson was and what makes this movie about him stand out.
Keeping in mind, the value of Kaye’s interview to the whole of Where The Buffalo Roam, Murray’s on-screen work and the story at the movie’s center, the whole of those elements gives audiences plenty to appreciate about Where The Buffalo Roam, making it a must see at least one time. More information on this and other titles from Shout! Factory is available online now at: