Machine Head has unveiled the video for the title track from its forthcoming album Catharsis.

The album’s latest single was unveiled just recently. The video places the band in an asylum setting as it performs its new song. That footage is crossed with footage of Butoh dancers in the grim setting for a powerful visualization of the song’s musical and lyrical energy. Audiences can view the video online now here. 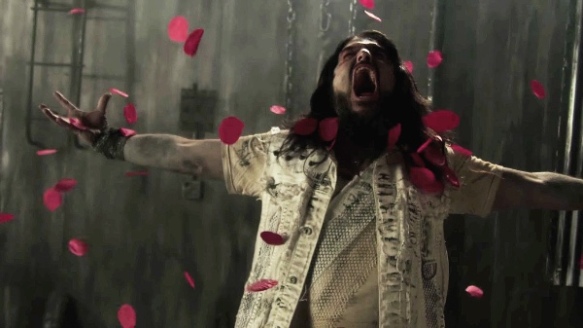 The Butoh dance rose from post-WWII era Japan. According to information provided about the dance, it involves dancers painting themselves in ash, “taking on a gaunt, deathly look.” The dire facial expressions and body language are collectively meant to express the pain and suffering that rose from atomic warfare. Front man Robb Flynn said that the use of the Butoh dance to help illustrate the song’s lyrical theme was an important addition to the video.

“‘Catharsis’ was a tricky concept to translate to a visual,” Flynn said. “How do you express somebody’s catharsis? Frasier, the director, brought up the Butoh dance concept, and it tied in so well into the idea of what catharsis could be. When the Butoh dancers began performing for the video, we were blown away. Their expressions were so pained, almost horrifying, and yet very sad; It was extremely moving.”

“On a personal level, I related to this aspect,” Flynn said. “My uncle Jimmy lived with us for years while growing up. He had experienced some pretty severe drug testing when he was younger and didn’t come out of it very well. For the rest of his life, he would do things like not eat for seven days straight and talk to Jesus all day. It was a trip to grow up with that at home. So, we took these disparate elements and turned them into a very cinematic and psychedelic visual to express that.”

Audiences can get even more insight into the video’s creation online now with a special “making of” video that includes footage showing how the makeup was done along with the Butoh dancers’ choreography and more. That video is streaming online now here.

‘Catharsis’ is just the latest video to be released from the band’s forthcoming album. The band also recently unveiled the live video for the band’s performance of ‘Now We Die.’ The song is one of an extensive live set included in the album’s deluxe edition. Also streaming online now is the song ‘Beyond The Pale,’ which is also included in Catharsis‘ body.

Pre-orders for Catharsis‘ standard and deluxe edition are open now. The album’s full track listing is noted below.

Machine Head will hit the road this winter for a tour in support of Catharsis. The tour is currently scheduled to launch Jan. 25 in Phoenix, AZ and run through March 7 in Seattle, WA. It will also include performances in Buffalo, NY; Madison, WI; Los Angeles, CA and other cities nationwide.

The tour’s current schedule is noted below.  Tickets and VIP packages are available here.