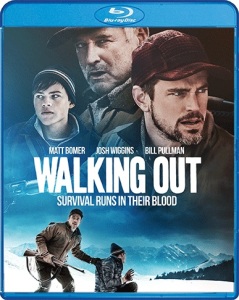 IFC Films has, for the longest time, prided itself on releasing movies that strayed from the mainstream, opting for original content over copy cat flicks. Apparently all good things must come to an end, even for IFC Films, as has been proven in the studio’s new wilderness drama Walking Out. This 96-minute movie is a work that can easily be likened to so many bigger name dramas of the same ilk including The Grey, The Edge, The Mountain Between Us among so many other major blockbusters. Taking this easy comparison into consideration, the movie’s central story becomes a critical piece of its presentation — one that both succeeds and fails at the same time. It will be discussed shortly. The movie’s cinematography is another key piece of its whole and proves quite impressive to say the very least. It will be discussed later. The bonus behind-the-scenes featurette included with the movie rounds out the movie’s most important elements. It will also be addressed later. Each element is important in its own right to the whole of Walking Out. This will be proven through this analysis. All things considered, they make Walking Out an interesting new effort from IFC Films, and hopefully its only attempt to compete with the mainstream.

IFC Films’ new wilderness drama Walking Out is an interesting new effort from a studio that has made such a name for itself by creating movies that stand largely apart from the mainstream. That aside, it is still worth at least one watch. That statement is supported in part by the movie’s story. More specifically, the subplot at the center of the story is what really makes the story stand out. The story’s subplot centers on Cal’s (Matt Bomer) attempt to reclaim the father son relationship that he lost with his own father, Clyde (Bill Pullman) by going out on a hunting trip with his son, David (Josh Wiggins). The duo’s hunting trip starts as a search for game bird before somehow transforming into Cal’s own almost “Mellvillian” hunt for a bull elk. The aspect of Cal trying to secretly trying to reclaim that bond that he lost with Clyde is an original setup for the wilderness drama genre, giving at least one reason to watch the movie. However, this aspect of the story is where the success ends.

At first, David doesn’t seem to care in the least about hunting, but as soon as he even comes close to bagging his first kill (which ultimately escapes), David suddenly enjoys hunting and agrees to go on the fateful hunting tip in search of the elusive bull elk (just as Ahab went after the elusive white whale). this sudden change of heart so to speak is a bit bewildering. A couple of brief encounters with a grizzly bear during the hunt leads David to be injured and in turn accidentally shooting Cal, which sets up the fight for survival that takes up the rest of the movie. This is where the story starts to suffer. Viewers will note that Cal loses more blood every day as David carries him back down the mountain. This is despite the tourniquet applied to Cal’s leg. Considering how much blood Cal had to have lost along the way, he should not have survived as long as he did. The ultimate outcome won’t be revealed here, but it definitely leads to that unavoidable question of how Cal survived for such a long time. What’s more, after the initial meetings with the bears that set off the fight for survival, there is no more threat from them for the rest of the movie’s run. This means that the only real threat that David and Cal face on the journey back down the mountain is mother nature (a la the famous short story Open Boat). Ironically, one can’t help but keep watching to see if father and son make it down the mountain and back to safety. To that end, even with the problems posed throughout the story, the ability of the story to still keep audiences engaged makes the story at least a partial success. It is only one part of what makes the movie worth at least one watch. The movie’s stunning cinematography is just as important to its overall presentation as the story.

Walking Out‘s cinematography is so important to discuss in analyzing this movie because it really is the cornerstone of the movie’s presentation. Shot entirely in the mountains of Montana, the sweeping shots of said mountains as a backdrop creates a sense of awe, heightening the story’s drama. Honestly, one could argue to a point that the noted heightened drama is what in fact keeps audiences watching. It’s a sort of subconscious element. Keeping that in mind, those behind the lenses are to be commended for their work. Of course the sweeping mountain backdrops and aerials are not the only impressive cinematic elements. The general scenery used in each act is just as impressive as those sweeping mountain backdrops. The very fact that the scenes were real instead of CG adds to the interest in their look. It was nice to see the effort and time taken to make the tension in each scene so believable even through something as simple as the snow-covered ground. Between that effort and the effort put into using the rest of the movie’s cinematography to heighten the story’s emotion (and in turn engagement) it can be said with ease that the cinematography at the center of Walking Out does more than enough to keep audiences from walking out on this movie. It is not the last of the movie’s most important elements, either. The bonus material included in the movie’s home release rounds out its most important elements.

The bonus material included in Walking Out‘s home release is so important because it is yet another example of how much bonus material can actually add to a movie’s viewing experience. The behind-the-scenes featurette makes the overall viewing experience more enjoyable because of the back story that it gives the movie itself. Audiences learn that Bill Pullman (Independence Day, Spaceballs, Independence Day: Resurgence) agreed to star in this movie as a supporting actor because of his love for the mountains and for working with the movie’s creative heads. The discussions with Matt Bomer and Josh Wiggins are interesting in their own right, too. Audiences will be interested to hear of the pair’s dedication to making the movie believable, which shows throughout the movie. Considering the movie’s plot, it would have been so easy for either man to ham it up. Luckily though, that did not happen at any point. Maybe that plays into keeping audiences engaged, too. Getting back on track, the interviews are not the only important bonuses included with the movie. The deleted scenes add their own depth to the story. One of the most important of the deleted scenes is a light-hearted moment between David and Cal in which the pair finally gets to smile for once. Considering the abundance of tension and drama throughout this movie, this is a scene that should not have been cut. It would have added so much to the movie, even as brief as it was. David and Cal’s discussion about Cal’s divorce with his wife (who is never named anywhere in the movie) is another moment that while minor, still could have added a little more to the movie. It’s too bad that scene was left out. On the other hand, it was good to see the scene involving the tire blowout on the jeep was left out. That whole sequence, which partners with David’s arrival at the airport, really was unnecessary (at least in this critic’s eyes). All things considered, the deleted scenes and interviews that make up Walking Out‘s bonus material prove to be another positive to this movie’s presentation, and gives even more reason to watch the movie at least once. When this is considered along with the importance of the movie’s cinematography and even the story’s rare positives, all three elements make this movie one that will, in the long run, just manage to keep audiences from walking out themselves.

IFC Films’ new wilderness drama Walking Out was a big risk for the studio, which has for years prided itself on avoiding any movie similar to those in the mainstream. While it was a risk, it was a risk that paid of at least to a point. That is evidenced in a story whose problems cannot be ignored, but are not enough to make the movie completely unwatchable. The movie’s cinematography is stunning to say the very least, and serves as the cornerstone of the movie’s presentation. The bonus material included in its home release adds its own interest to the movie’s presentation. Each element is important in its own right as has been pointed out here. All things considered, they make this movie a work that just manages to keep audiences from walking out themselves. It is available now in stores and online and can be ordered direct via Shout! Factory’s online store. More information on this and other titles from IFC Films is available online at: