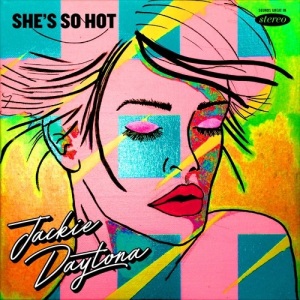 Indie rock act Jackie Daytona has some new music on the way.

The band, comprised of its namesake and Daytona’s band mate Justin Robinson, is currently scheduled to release its new seven-song record She’s So Hot March 2.  The duo self-produced the record while Norman Matthew (As Strange As Angels, Murder FM) handled mastering and mixing duties.

Daytona said the very idea of writing a record started years ago on a whim by both members.

“We kind of started it as a joke because a drum and bass band would be the only way we’d get to make any decisions,” Daytona said.  “I ultimately got Justin to agree that if I wrote songs, we would make a record.”

The writing process took a year and a half while the songs were tracked in only three days.  Robinson said being able to record the record and handle all of the creative decisions was creative for he and Daytona.

“We were making music and had no rules,” Robinson said.  “Usually a producer comes in or the lead singer, and directs us (the rhythm section), but this was really whatever we could think of.”

The full track listing for She’s So Hot is noted below.

More information on Jackie Daytona is available online now at: