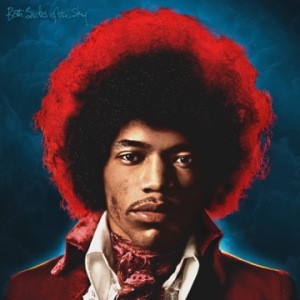 Next Friday, March 9, Experience Hendrix, LLC and Legacy Recordings will release the next collection of previously unreleased Jimi Hendrix songs, Both Sides of the Sky in stores and online.  In anticipation of its release, National Public Radio is streaming the album in whole online now.

The 13-song album is streaming via NPR’s First Listen.  It is the finale of the companies’ current trilogy of what are considered some of Hendrix’s most significant, previously unissued work.  The trilogy’s other two albums are the previously released Valleys of Neptune (2010) and People, Hell and Angels (2013), both of which reached the top 5 of Billboard’s Top 100 chart.

The songs featured in Both Sides of the Sky were recorded between 1968 and 1970, and feature guest appearances by the likes of Stephen Stills, Johnny Winter and Lonnie Youngblood.  Jimi’s longtime producer Eddie Kramer co-produced the record alongside Jimi’s sister Janie and friend John McDermott.

Both Sides of the Sky‘s track listing is noted below. Pre-orders are open now.

Both Sides of the Sky tracklist:

More information on Both Sides of the Sky is available online now along with all of the latest Hendrix news at: