Standing Room Only is currently scheduled to be released in stores and online May 4.  the three-disc set will be available on separate CD and digital platforms.  The performances featured in the collection were originally recorded between the 1960s and 80s.

The first concert was recorded January 28, 1966 at The Sands in Las Vegas.  It was his second show with Count Basie at the facility, and included performances of ‘Come Fly With Me,’ ‘Luck Be A Lady,’ ‘Fly Me To The Moon’ and 13 other songs.  This performance was, until now, unavailable on CD.

The set’s second concert was originally recorded October 7, 1974 at the Spectrum Arena in Philadelphia, PA.  Like the first recording, this recording has also been unreleased on CD until now.  It includes performances of ‘The Lady Is A Tramp,’ ‘I Get Along Without You Very Well,’ ‘I’ve Got You Under My Skin’ and 14 other songs.

Sinatra’s October 24, 1987 performance at Reunion Arena in Dallas, TX rounds out the set’s recordings.  Previously unreleased in its entirety until now, this recording’s set list is the most extensive of the trio, with 24 total songs.  Those songs include ‘Bewitched,’ ‘Mack The Knife,’ the theme from ‘New York, New York’ and many others. 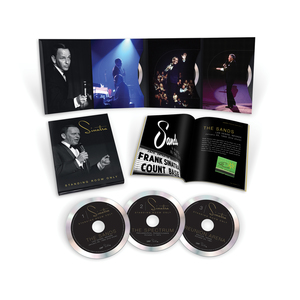 More information on Standing Room Only is available along with all of the latest Sinatra news at: