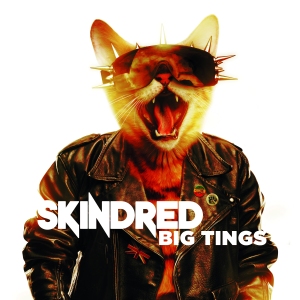 Veteran rock act Skindred returns later this month with its seventh full-length studio recording.  Big Tings is scheduled to be released Friday, April 27 via Napalm Records, and will come almost a year and a half after the release of its most recent album Volume (2015).  This 10-song record picks up right where Volume left off, with all of the same bombast and energy of that record and its predecessors.  This is proven right from the album’s outset in the form of the album’s title track.  While this roughly 35-minute album boasts all of the energy and bombast that audiences have come to expect from Skindred, it also presents a more subdued side this time out in ‘Saying It Now.’  This song is quite the departure for the band both musically and lyrically in comparison to the album’s other offerings.  As a matter of fact, it would be no surprise if the band (or whoever makes the decisions at Napalm Records) opts for this as one of the album’s radio singles because it is such a star departure.  It’s just one more of the songs that serves to show what this record has to offer.  ‘Machine is one more example of what makes Big Tings another strong effort from Skindred, but is most certainly not the last of the album’s strong points.  ‘Tell Me’ is another interesting subdued moment included in the album, and its placement midway through the album helps to break things and in turn keep things interesting.  ‘Alive,’ with its driving arrangement, could be used as a radio single, too.  ‘That’s My Jam’ and ‘Last Chance,’ both offer plenty of heavy for fans who wanted that.  Between all of these tracks and those not noted directly here, the end result of Big Tings is a work that is a strong return for Skindred and another album from the veteran rock act that is certain to impress audiences new and old alike.

Skindred’s forthcoming seventh full-length studio recording Big Tings is a fittingly titled new offering from the veteran Welsh rock band.  That is because it is a record that displays a certain growth from the band.  The album’s closer, ‘Saying It Now’ is one of the songs that serves to exhibit that growth.  It will be discussed shortly.  Those who like the band’s heavier side get plenty of that in this record, too beginning with the album’s opener and title track.  It boasts all the bombast and energy of the band’s biggest hits from its past records, starting with a basic, yet infectious, drum beat and claps.  That opening eventually builds to an equally infectious riff that is just as certain to get stuck in listeners’ heads.  Lyrically, it’s just as big as it seemingly delves into that familiar realm of battling personal matters; not so much demons per se but so many thoughts that won’t get out of one’s head.  What’s really interesting is the song’s chorus in which Wedde sings, “Some things are bigger than me/I can’t trust myself/Some things are bigger than you/I can’t trust myself.”  It’s as if the song’s subject is telling himself to let go of those worries and concerns because some things are just bigger than any of us, and we just have to let things happen.  This is only this critic’s interpretation, and should not be taken as the only one.  Hopefully it’s somewhere in the ballpark.  Either way, it definitely makes for an interesting discussion point and start to the record.  That’s especially the case considering that this record could have been so much more of a downer than it is – musically speaking – what with that lyrical content.  Luckily, the band didn’t go that route, with the end result being a song that is certain to entertain and inspire listeners.  It’s just one of the songs that serves to show what makes this album a welcome return for Skindred.  ‘Saying It Now’ is another example of what makes Big Tings a strong new effort from Skindred.

‘Saying It Now’ is easily one of this record’s most radio ready songs.  Compared to its counterparts, it is quite the subdued composition that interestingly enough can be compared to so many songs from Sevendust.  It’s hard in its chorus sections, yet so much more controlled in its verses.  That dynamic contrast adds greatly to the song’s general effect, and in turn is just as certain as ‘Big Tings’ to pique listeners’ interest.  Of course it is only one part of what will keep listeners engaged.  Its lyrical content is just as certain to grab listeners.  Lyrically, this song comes across as a person ruing not speaking one’s mind to another while that other person was alive.  That is inferred as Webbe sings right off the top, “Tell them that you love them while they’re here/Tell them while you’ve got the chance/Always thought that you’d be here/I never imagined a world without you/I put off what I could do today/And say that I’ll go see you tomorrow/But it’s too late now/Cause you’re no longer here/I’m saying it now/But I wish I’d said it before.”  He goes on in similar fashion in the song’s second verse, singing, “I sit here crying in this room/With memories rushing back of you/So many chances now I blew/There was a million times I could have said I love you/But it’s too late now/Cause you’re no longer here.”  The song’s third and final verse follows in similar fashion as verses one and two, with the song’s subject regretting the past.  As with the album’s opener, the subject matter here leads one to think this song could have been one of those all too familiar brooding goth-esque pieces that take on self hatred, etc.  Yet, again, the band didn’t go that route, musically.  However, the song does capture the pained emotions that one might go through in the moment of losing a loved one.  This critic will attest to having felt those emotions many years ago at having lost a family member to heart failure.  Again, that ability to capture that emotion and make it relatable to audiences makes this song stand on its own merits.  Considering that this is a rare show of growth for the band both musically and lyrically, makes the song stand out just as much.  Keeping this in mind, it is another work that shows why this album is such a strong return for Skindred.  It still is not the last of the songs that serves to make the album so strong.  ‘Machine’ is yet another example of what makes this album stand out.

‘Machine,’ with its infectious guitar-driven late 80s/early 90s musical arrangement wastes no time grabbing listeners’ attention.  It is a straight-forward rocker that, musically speaking, is certain to be a live favorite just as much as a favorite on record.  That’s especially the case as the song reaches its bridge, the band singing in unison, “It saved my soul/Rock and roll.”  That chant, (which makes at least this critic think of AC/DC) set alongside drummer Arya Goggin’s steady time keeping and bassist Dan Pugsley’s steady line, will have live audiences chanting right along just as much as those who sing along on record.  The same applies as the band chants early on, “And if we don’t get what we want/We gonna take it.”  Of course that is just one part of what makes the song so appealing, lyrically.  Wedde sings in the song’s lead verse, “I’m not going out/I’m going all out/One becomes two, becomes ten, becomes all out/Now I don’t even care if I have nothing to chill out/yeah this is my scene/turn the ignition/Start the machine/Put the pedal to the metal/Put your foot on the floor…I can’t find my keys and I can’t find my phone/I’m having too much fun and I’m not going home/Wherever you’re going, I’m going, too/And if I’m going off the wheels/I’m gonna take you all the way.”  Plain and simple, this song comes across as a no-monsene balls to the walls rock and roll party song.  This is someone that’s just out for a good time.  The song’s companion video seems to hint at that, too.  This is that more familiar, heavier side that so many others have complained that they wanted on this album.  It is not the last of the album’s heavy, either.   ‘My Jam,’ the album’s new single, and ‘Last Chance’ both offer plenty of heavy while ‘Tell Me’ offers more of the band’s subdued side, changing things up in its midpoint placement in the album’s sequencing.  Between those songs, the ones noted more directly here and those not so directly noted, the whole of Big Tings proves to be in fact a “big” new record from Skindred and one that is deserves a spot on any critic’s list of the year’s top new rock records.

Skindred’s forthcoming seventh full-length studio recording Big Tings is a “big” and solid new outing for the veteran Welsh rock band.  As has been noted here, songs such as the album’s opener/title track, the deeply moving album closer ‘Saying It Now,’ with its Sevendust-esque arrangement and heartfelt lyrics both prove that.  The latter of the pair especially proves it as it was a rare risk for the band otherwise known for much heavier material.  ‘Machine,’ with its driving hard rock arrangement and pure rock and roll lyrical theme proves what makes the album stand out even more.  Of course one can’t ignore other offerings on this record such as ‘Tell Me,’ ‘Last Chance’ and ‘My Jam’ in proving what makes this album so strong. Between these songs and the album’s other offerings, the album in whole proves to be a “big” return for Skindred.  The album drops April 27 via Napalm Records in stores and online.  More information on Big Tings is available online now along with all of Skindred’s latest news and more at: