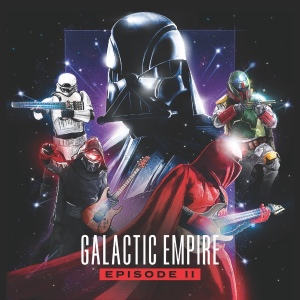 Galactic Empire is giving audiences another preview of its new album.

The band, today, premiered ‘Rey’s Theme.’  The song is the second single from the band’s sophomore album, aptly-titled Episode II, which is due out May 4 via Rise Records.  It follows the recent release of the album’s lead single ‘Scherzo For X-Wing.’

‘Rey’s Theme’ stylistically is very similar to the songs exhibited in Galactic Empire’s self-titled debut and to ‘Scherzo For X-Wing.’  It is a very progressive metal style arrangement that once again bears quite the similarity to works from Powerglove and other similar acts, yet also stays true to its source material.

Pre-orders for Episode II are open now. The album’s full track listing is noted below.  More information on Episode II is available now along with all of Galactic Empire’s latest news and more at: