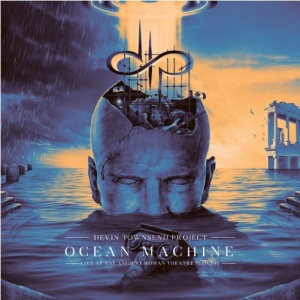 Devin Townsend has a new live recording on the way.

The Devin Townsend Project founder announced Friday that the band will release Ocean Machine — Live at the Ancient Roman Theatre Plovdiv on July 6 via InsideOut Music.  Originally recorded September 22, 2017 at the noted venue, the concert was a celebration of the 20th anniversary of DTP’s landmark album Ocean Machine.

The special performance featured the band accompanied by the Orchestra of Plovdiv State Opera and features the band performing the noted album in its entirety.  As an added bonus, the concert also included a handful of fan-requested songs.

Townsend said in an interview that he was glad the concert will finally see the light of day.

“Plovdiv and this live package represents a lot to me,” Townsend said.  “It signifies the end of one era and the celebration of another.  Amidst a grueling tour year, this show came together with much blood, sweat and tears, and the result is the culmination of many aspects of my work on one stage.”

He added he was impressed by the concert, looking back on it in hindsight.

“Ocean machine was released 20 years ago, and though Marty (drums) is no longer with us, I was able to finally perform the album in its entirety with the original bassist John ‘Squid’ Harder on this night,” Townsend said. “On a cold evening in an old city in the ancient theatre, many lifelong milestones came to a conclusion on this night and I’m exceptionally proud of it. This is a very special live recording of a very special night, and I hope you enjoy it as a monument to the things that inspired it all in the first place.”

The recording’s full track listing is noted below.

The full track-listing is as follows:
By Request with Orchestra

More information on Ocean Machine — Live at the Ancient Roman Theatre Plovdiv is available online now along with all of Devin Townsend’s latest news and more at: