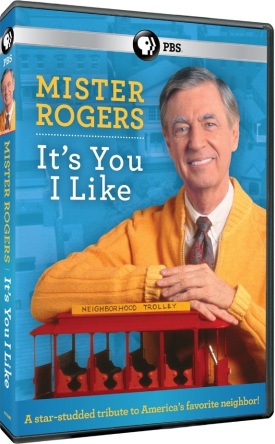 Public Media Distribution will release to DVD next month another documentary focused on Fred Rogers and his beloved series Mr. Rogers’ Neighborhood.

Mister Rogers: It’s You I Like was released digitally Sept. 3 and is currently scheduled to be released on DVD Oct. 2. The hour-long documentary, which originally aired on PBS and not to be confused with the other Fred Rogers documentary Won’t You Be My Neighbor, is a retrospective on Fred Rogers and his beloved series.

Veteran actor Michael Keaton (Batman, Baman Returns, Spiderman: Homecoming) serves as host for the heartwarming documentary.  It also features interviews from other well-known figures, such as Yo-Yo Ma, John Lithgow (3rd Rock from the Sun, The World According to Garp, Interstellar), Whoopi Goldberg (The View, Star Trek: The Next Generation, Ghost) and others.

Mr. Rogers: It’s You I Like will retail for MSRP of $19.99 and can be pre-ordered now at a reduced price of $14.99 at PBS’ online store.  More information on this and other titles from PBS is available online now at: