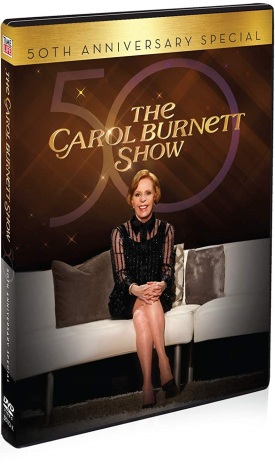 Over the course of 11 seasons, CBS’ The Carol Burnett Show was one of the biggest hits for the one-time powerhouse network.  Its mostly family-friendly brand of sketch comedy was the type of programming that sadly has been so lost today.  Thankfully Time Life has, over the past four to five years, released so much material from that timeless series, for the show’s original fans to enjoy along with a whole new generation of fans.  Late last year, CBS paid tribute (or so it would seem) to the legacy of The Carol Burnett Show with what was marketed as a 50th Anniversary celebration that was broadcast nationwide.  That broadcast was released on DVD Sept. 18 via Time Life and while it is worth at least one watch, it sadly falls short of being a true tribute to The Carol Burnett Show and its namesake.  One of the items that makes the presentation worth at least one watch is its clips of the classic variety show.  This will be discussed shortly.  Where the clips succeed, the celebrity interview segments sadly fall very short.  They collectively do more harm than good for the show’s presentation.  This will be discussed a little later.  The bonus material thankfully makes up – at least a little bit – for the damage done by the live segments.  Together with the clips of the series’ classic moments, that combination does just enough to make this presentation worth at least one watch, although it clearly falls short of expectations.

CBS’ attempt at a 50th Anniversary tribute to The Carol Burnett Show and its namesake host is a presentation that is worth at least one watch, but sadly not much more than that.  Rather, it falls quite short as a tribute, especially to what was and is one of the most important programs in CBS’ history and the history of television.  The clips of the program’s most notable moments are, collectively, among the only reasons to watch this home release of the special broadcast.  From the famed Gone With The Wind spoof to the clips of Tim Conway’s greatest moments (including the famous firefighter skit and the dry cleaners skit) to the now infamous “The Family” skit, which saw Conway tell his story about the Siamese elephants to Bernadette Peters’ performance of ‘All That Jazz’ and more, the clips presented in this special are the crown jewel of the special.  At least in watching the clips, audiences of all ages will be entertained, and maybe even be influenced to pick up any or all of the far more worthwhile Carol Burnett Show compilations that have been released ahead of this presentation.  As much as the clips do to make the DVD worth the watch, the interview segments counter the benefits of the clips.

The interview segments, which feature Carol Burnett talking to celebrities, such as Jay Leno, Jim Carey, Kaley Cuoco, Martin Short, Maya Rudolph, Jane Lynch and Steve Martin (just to name a handful) are honestly painful to watch.  That is because it is clear from the introductions to the interviews themselves that every moment has been rehearsed multiple times.  Even the baner, that is supposed to come across as natural, is anything but.  This is especially obvious through each figure’s body language in each segment.  From the clear camera turns (some of which were jumps ahead of the cues) to the obvious reading of the prompter time and again, to the way the groups even acted, none of the interview segments felt natural.  The problem with this is that it can so easily lead one to feel like the celebs tapped to take part were just going through the motions and did not fully want to be there.  Even the approaches to various topics and the tosses to the clips felt forced throughout.  Keeping all of this in mind, the live segments that are meant to be the central point of this “tribute” are clearly not a tribute, but more just an excuse for a celebrity showcase.  That is really sad, especially considering that this program was billed as a tribute to Burnett and her show.  Of course as much damage as those live segments do to this presentation, the bonus material included in its home release couples with the show’s bevy of classic clips to give audiences a little bit more to appreciate.

The bonus material is limited in this DVD, but is still at least somewhat entertaining.  The “Red Carpet Love” segment takes audiences to the red carpet ahead of the special, showing some actually natural moments that are also light hearted in the process.  This segment even features actual comments from the celebs themselves offering their well wishes and congratulations to Burnett.  It is nice to see, considering how forced their on-stage moments feel.  The commercial break interview segments are okay at best.  Burnett’s talk with now former Dancing With The Stars host Tom Bergeron is another moment that feels entirely forced.  There is also a discussion with what turns out to be some former dancers from The Carol Burnett Show who attended the show’s taping as audience members.  Between those two moments and the celeb interview segments, the whole thing just seems even more forced.  However, there was one funny and seemingly natural moment in which Carol Burnett Show designer Bob Mackie offers a rather witty joke about the shows costumes, which will not be repeated here for those who haven’t yet watched this presentation.  Keeping in mind all of this, the bonus material included in the home release of The Carol Burnett Show 50th Anniversary Special adds a little bit to the program’s enjoyment, albeit very little.  Luckily, it offers just enough that when coupled with the classic clips featured throughout the program, the whole of those elements makes for just enough to make the special worth at least one watch, but sadly not more.

CBS’ classic variety series The Carol Burnett Show is one of the greatest series to ever grace the airwaves.  It is also one of the elite series that made CBS a powerhouse in the network’s heyday.  Considering this, one would have thought that when the 50th anniversary of the series’ debut rolled around last year, the series would have gotten a huge tribute.  What was presented in its place was anything but entertaining.  Rather, as the recently released DVD presentation shows that it was little more than an opportunity for a celebrity showcase.  At least the program offers plenty of entertaining clips and a little bit of entertainment from the bonus material included in the DVD.  Considering all of this, the home release of The Carol Burnett Show 50th Anniversary Special proves to be worth at least one watch, but hardly a fitting tribute for a landmark series that deserved far more from CBS.  It is available now.  More information on this and other titles from Time Life is available online now at: