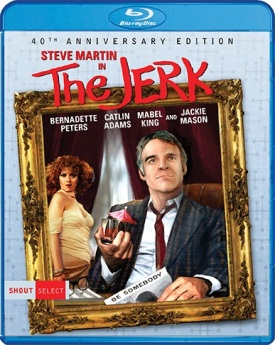 The movie is scheduled to be released on Blu-ray Tuesday as part of the company’s ongoing Shout! Select series.  Originally released Dec. 14, 1979 via Universal Pictures, the movie is considered by many to be Martin’s breakout movie.

The story stars Martin as Navin Johnson, the adopted son of a poor, black sharecropping family in Mississippi.  Johnson heads out into the world on his own to find his “special purpose,” which leads to meetings with a would-be assassin, work with the circus and gas stations, an encounter with a service dog, a romance and a financial windfall.  Navi’s new-found fame and fortune leads to plenty of its own problems for the hapless man.

Shout! Factory’s new re-issue of the classic comedy features a handful of bonuses, including, but not limited to two new interviews with Martin and Reiner, and with the writing team of Michael Elias and Carl Gottlieb.  The full list of the movie’s bonus material is noted below.