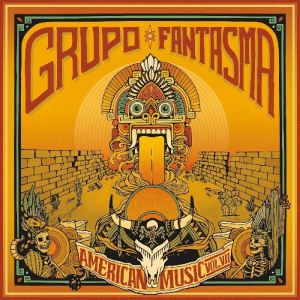 Veteran Latin music act Grupo Fantasma is set to release its latest full-length studio recording next week.  The album, entitled American Music Vol. VII is in fact the band’s seventh full-length studio recording.  Despite what the album’s title might seem to infer, the band’s past six album – the first of which was released in 2002 – are not entitled American Music.  Rather, the title is a hint to the fact that Latin music is part of the American musical community in whole.  The 13-song, 55 minute album is another solid collection of songs that will appeal just as much to Latin music fans as it will to the most devoted fans of Grupo Fantasma.  That is despite the fact that the album’s vocals are presented almost entirely in Spanish.  One of the songs featured in the album, that serves to show what makes this record so appealing comes slightly past the album’s halfway point in the form of ‘Let Me Be.’  It will be addressed shortly.  When considered alongside the clear sociopolitical commentary and Latin vibes of ‘The Wall,’ the two songs together show even more what makes this record such an interesting new offering from the veteran Latin-Funk act.  ‘LT,’ which comes early in the album’s run, is yet another notable addition to the album’s body.  It will be addressed later.  Between this work, the other two noted here and the rest of the album’s offerings, the whole of American Music Vol. VII shows itself to be a record that will appeal to every American.

Grupo Fantasma’s forthcoming full-length studio recording American Music Vol. VII is a positive mew musical statement from the veteran Latin-funk outfit.  That is because it is a record that shows from start to finish, Latin music is part of the overall American musical community.  ‘Let Me Be,’ which comes a little more than halfway through the record’s almost hour-long run, is just one of the songs featured in the album that serves to support that statement.  That is evident in part through the song’s musical arrangement, which crosses the band’s standard Latin elements with a very 1960’s-era style funk sound, complete with horns, guitars and vocals.  Not having liner notes to refer to, one cannot identify the vocalists featured in this song, but their talent and style is undeniable.  That aside, the use of the vocals, saxophones, trumpets and guitars lends itself collectively to a comparison with some of Carlos Santana’s greatest works.  As the song enters its bridge, a little more than halfway through its almost four-minute run time, it features a moment that can easily be liked to Ken Barry’s timeless hit, ‘One, Two, Three.’  The overall production is an engaging and enjoyable musical arrangement that is just one part of what makes this song stand out among the LP’s offerings.  Its lyrical content is just as important to note.

The vocalists presented in this song sing proudly of being comfortable in themselves, not caring what others say and do.  They sing in the song’s lead verse, “I don’t need the people who always think they’re right/They always feel the need to tell me/How well I should be/I always take you with a grain of salt/And I come back to tell them/Mind your own business/Just let me be.”  They go on to sing in the song’s second verse, “You may know me a little or you don’t know me at all/You feel the need to tell me your unwanted opinions/I can only take it and try to be polite/So just you keep your judgment to yourself.”  The group leaves zero doubt by this point as to the statement being made in these words.  This is a proud, self-confident musical middle finger of sorts to people who feel the need to interject themselves into everyone’s business except for their own.  Every person in this country knows and knows of someone of that nature, including this critic.  In other words, this is a statement to which any listener can relate in terms of its lyrical theme.  At the same time, the infectious groove presented in the song’s musical arrangement will leave listeners with a smile on their faces just as much.  The combination of the elements’ pairing makes the song a work that is sure to be a fan favorite, and just one of the album’s best songs.  As previously noted, the seriousness and urgency of ‘The Wall,’ which is obviously a statement about events going on in the news at this moment, is another of AMVS’ body.

‘The Wall’ is not the first time that Grupo Fantasma has delved into the world of Latin rap.  Even with that in mind, it shows itself to be another work of Latin musical elements (and even again some old school funk) that will especially reach some of the band’s younger listeners who might be less familiar with the organization.  The vocalist – again who cannot be identified here being that no liner notes were sent to this critic with the album – raps, “Everybody listen up/’Cause this is happening now/the moment is so critical/I set it to loud/If you can hear me in your ear…Life or liberty/the justice for publicity/When it comes to everybody/Please come and get me/Oh history/Don’t even live to see/That can of worms/Digging holes in your legacy/Walls are bound to fall/Expose treachery/My pot is melting/Best with your recipe.”  It’s a brief statement, but a powerful one nonetheless.  The reference to the wall at America’s Mexican border that Donald Trump keeps demanding is clear and present, as is the virtual indictment of Trump’s character.  The vocalist even directly addresses the immigration issue connected with the wall, which has been just as prevalent in the news.  Considering the energy in the song’s arrangement and the fire in that energy, the message sent in the song’s lyrical content is illustrated and delivered clearly and expertly.  The combination of the elements makes the song in whole another important standout addition to AMVS, and more proof of what makes the record such a strong new offering from the band.  It still is not the last of the album’s most notable works.  ‘LT,’ which comes early in the album’s run, is one more key song to discuss.

‘LT’ stands out because of its musical and lyrical content alike.  The song’s musical arrangement is another familiar Latin-tinged piece that wastes no time getting listeners on their feet and moving with its combination of horns and percussion.  Lyrically, it is just as certain to get listeners’ attention, as the vocalist here sings, “There she lays/Looking sexy/there’s nowhere else I’d rather be/Pressed myself against her gently/But she pushed me off and said to me…I want you to take me to my fantasy/slow down now/Stay away from the kiss.”  There’s also a mention here of a dance floor, and trying to seduce the woman with some dance moves.  This is hardly the first time that any musical act has gone down this road.  However, in the case of Grupo Fantasma, the group’s approach to the topic, both musically and lyrically gives the topic a new take, and one that is certain to keep listeners engaged and certainly entertained, if not more.  When it is considered along with the previously discussed songs and the rest of the record, the whole of the LP becomes a work that every American will enjoy.

Grupo Fantasma’s forthcoming seventh full-length studio recording American Music Volume VII is another stirring success for the veteran Latin music act.  That is because from start to finish, as has been evidenced in the songs discussed here.  Those songs, together with the album’s other eight tracks – especially the likes of ‘Yo Quisiera,’ the very Santana-esque ‘Nosotros’ and rather Cuban style ‘Que mas Quieres de Mi’ – make this record a record that any of the band’s longtime fans will enjoy.  The same can be said of those who might be less familiar with the band’s work.  From start to end, the band mixes its Latin roots with plenty of other elements that are all their own unique part of America’s musical consciousness.  Keeping that in mind, the album in whole proves to be another work from Grupo Fantasma that every American will enjoy.  American Music Volume VII will be released March 29 on Blue Corn Music.  More information on the record, the band’s current live schedule and all of the group’s latest news is available online now at: