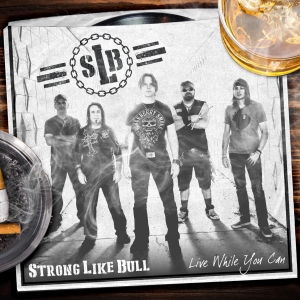 Independent rock and roll band Strong Like Bull wants audiences to live their lives as fully as possible.

That is the message in the band’s debut single ‘Live While You Can.’  The band, which is in the midst of a tour of its home state of Kansas, debuted the video for the single last month at puregrainaudio.com.  The video, which is also streaming on the band’s official YouTube Channel, finds the band performing its new single in a variety of settings, from a barn, to an open field to a rocky outcropping.

The song’s musical arrangement is such that it will appeal to fans of bands, such as Motley Crue, Poison and Guns N’ Roses, just to name a few similar sounding acts.  Its lyrical theme delivers a message of doing the most with one’s life, as pointed out by band member Dave Gray in a recent interview.

“‘Live While You Can’ is a song about not letting anyone keep you from living your life like you want to…including yourself,” Gray said.  “We give ourselves more reasons hat we shouldn’t do something we want to than anyone else does.  We’re supposed to know what we want to do with our lives, have a career by 22, and anything else we think society has told us we need to do to be normal.  Just be yourself.  Live your own life.  Don’t let someone else’s fears or your own fears hold you back.  You build your own cage.  You carve your own jail…You get one time around, you’ve got to understand, you build your own prison…gotta live while you can.”

‘Live While You Can’ is available to stream and download now through various outlets.  Those outlets can be reached here.

More information on Strong Like Bull’s new single and video is available online now along with all of the band’s latest tour dates, news and more at: