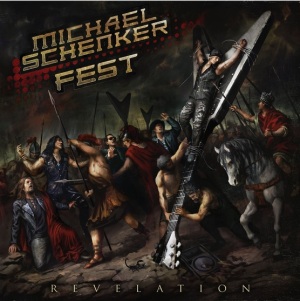 Michael Schenker Fest unveiled the video for its latest single this week.

The band debuted the video for its new single, ‘Sleeping With The Lights On‘ Friday.  The song is taken from the band’s forthcoming album Revelation, which is scheduled for release Sept. 20.

The video for ‘Sleeping With The Lights On‘ crosses footage of the band performing its new single in a setting that actually presents the video being created with a nurse-type figure doing some not-so-nice things to a patient with a hammer.

Schenker talked briefly about the video in a recent interview.

“Many people in my interviews expressed how much they like this song, and I tell them: ‘Wait till you see the video.’  It brings it [the song] to a whole other level,” Schenker said.  ‘By the way ,the making of the video was a lot of fun and sometimes even spooky.  I hope you enjoy it!”

The premiere of the video for ‘Sleeping With The Lights On‘ comes less than two months after the band debuted the video for ‘Rock Steady,’ the lead single from Revelation.

Pre-orders for Revelation are open now.  The album’s full track listing is noted below.

More information on Revelation is available now along with all of Michael Schenker Fest’s latest news and more at: