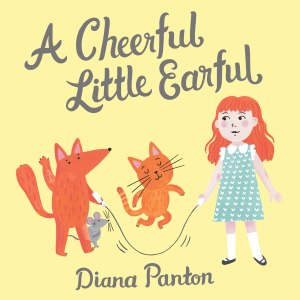 Diana Panton will release her latest album next month.  The album – A Cheerful Little Earful – is scheduled for release Oct. 18 through Little Things Records.  The 15-song, 53-minute album is Panton’s second family music album — coming four years after her debut family album 2015’s I Believe in Little Things — and her 12th overall album.  This latest offering from Panton is fittingly titled.  That is because it will leave listeners of all ages feeling cheerful after they get an earful of the record.  The album’s featured songs plays directly into that effect.  They will be addressed shortly.  The musical aspect of the album also plays into that positive impact, and will be addressed a little later.  The same can be said of the album’s sequencing by connection.  Each item noted is key in its own way to the whole of the album’s presentation.  All things considered, they make A Cheerful Little Earful a work that will leave every listener feeling cheerful.

Diana Panton’s latest full-length studio recording is a presentation that fits its title quite well.  That is because it does in fact prove itself A Cheerful Little Earful of music.  The record’s featured songs play their own part in that impact.  The record opens with Panton’s own take on the classic Rogers & Hammerstein song ‘Happy Talk,’ which is featured in the duo’s beloved musical ‘South Pacific.’  It is followed up by the song ‘It’s A Most Unusual Day,’ which was written and arranged by Harold Adamson and Jimmy McHughes, and made famous by Jane Powell in the 1948 MGM movie A Date With Judy.  Harry Woods’ 1926 hit song ‘Red, Red Robin’ – made famous by actress Lilian Roth – is also featured in the album, along with works from Perry Como (‘A, You’re Adorable’), Jimmy Van Huesen and Sammy Cahn (‘Pocket Full Of Miracles’ – taken from the 1961 movie of the same name), Sammy Fain, Bob Hilliard and Fr. Louis Sauvat (‘All In The Golden Afternoon’ – From Walt Disney’s 1951 classic animated movie Alice in Wonderland) just to name some more songs.  As if that isn’t enough, Panton once again offers at least one work for children in the form of the timeless Sesame Street tune ‘I Don’t Want To Live on the Moon.’  Of course likely just as many grown-ups know that song as do children, so to that end, that song will appeal to lots of adults as well as children.  Along with all of this, there is a Cole Porter work featured in the album in the form of ‘Experiment’ and even a cover of the Michael Jackson hit ‘Music and Me.’  That song was written by Michael Cannon, Don Fenceton, Mel Larson and Jerry Marcellino.  Simply put, Panton once again runs the proverbial gamut with this album’s featured songs.  That is just as evident in the other songs not noted here.  What is truly interesting here is that while the variety of songs is plentiful, they defy the standard definition of “Family Music.”  Most of the music here is jazz, and jazz is music for everyone, like with bluegrass (E.g. The Okee Dokee Brothers).  So it is a family music album, but also an album of music for audiences of all ages and backgrounds.  To that end, the songs featured in this album gives it a strong foundation.

That foundation is strengthened even more thanks to the songs’ arrangements.  The arrangements will appeal just as much to Panton’s longtime fans as they will to those who might be less familiar with her work.  From the light, easygoing piano-driven arrangement at the center of the album’s opener, ‘Happy Talk,’ to the more gentle, reserved arrangement at the center of ‘I Don’t Want To Live on The Moon’ (which is also centered around Don Thompson’s gentle, flowing piano line), to the equally reserved, guitar-centered arrangement of ‘If You Feel Like Singing, Sing’ to the more light hearted (and also guitar-centered) ‘Aren’t You Glad You’re You’ – which was used in the soundtrack to the 1945 Bing Crosby classic The Bells of St. Mary’s – and beyond, the arrangements featured throughout the album are really what make the featured works so easy on the ears.  Thompson’s work on the vibes from  point to point conjures thoughts of the one and only Lionel Hampton while Panton’s own vocal delivery once again is comparable to that of Diana Krall.  The arrangements are easy on the ears not just because of the instrumentation, but also because of their simplicity.  There are no over-the-top performances and solos at any point.  Rather, each song is simple and straight forward from beginning to end.  That adds even more appeal to each composition.  All things considered here, the arrangements presented in each song do just as much to make this record appealing as the songs themselves.  They still are not the last of the album’s most important element.  When the arrangements and songs are considered along with the record’s sequencing, all three elements work together to make the record that much more enjoyable and entertaining.

The sequencing of Cheerful Little Earful is important to note because it ensures listeners’ engagement and entertainment by keeping the record’s energy stable throughout its run.  As already notes, the album opens on a high, light hearted note in ‘Happy Talk.’  From there, the album’s energy gradually changes with the tempos gradually slowing until it reaches that famed Sesame Street classic tune.  Things pick back up a little after that in the album’s title track before pulling back again in ‘If You Feel Like Singing, Sing’ and ‘Music and Me.’  The change in the energies are subtle though the next few songs before picking up again more noticeably in ‘Aren’t You Glad You’re You.’  The album ends with two more gentle arrangements that take listeners out on a soft note.  Again, the album’s sequencing keeps the album’s energy just right from beginning to end, not changing too much from one song to the next.  That stability in the songs’ energies means listeners are more apt to remain engaged throughout as the variety in the arrangements and the songs.  When all of those elements are noted together, the end result is a record that truly is a cheerful little earful for listeners of all ages.

Diana Panton’s forthcoming album Cheerful Little Earful is a fittingly titled-album, especially for jazz and cinema fans.  That is because so many of the songs featured in this album are classic jazz tunes that are featured in some great classic major motion pictures.  They are not the album’s only songs, though.  As noted, there is at least one song taken from PBS’ long-running series Sesame Street and even a Michael Jackson cover.  That variety of songs and associated backgrounds means a wide ranging appeal in itself.  The songs’ arrangements add even more appeal to the record.  The album’s sequencing ensures the energies in those arrangements remains stable from the album’s opening to its end.  Each noted item is important in its own way to the whole of the album.  All things considered, they make Cheerful Little Earful an earful that will leave every listener cheerful.  More information on the album is available online now along with all of Diana Panton’s latest news and more at: