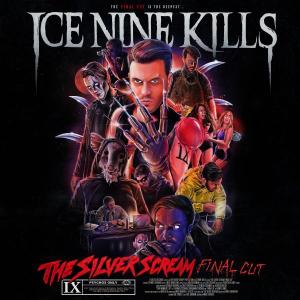 Ice Nine Kills has been in the news quite a bit lately.  The band debuted he video for its latest single ‘Savages’ this week, only a week after the band debuted its cover of Michael Jackson’s ‘Thriller.’  The band also announced recently, a new addition to its latest slate of live dates on Nov. 11 in Worcester, MA.  The band’s latest tour just launched Oct. 29 in Cleveland, OH and is scheduled to run through Dec. 1 in New York, NY.  All of these developments from the band are in support of the new re-issue of the band’s 2018 album The Silver Scream, The Silver Scream: Final Cut.  Released Oct. 25, this latest presentation of the band’s album is a step up from its source material.  That is due in part to the band’s cover of ‘Thriller,’ which is just one of six bonus tracks featured in the re-issue.  It is just one of the most notable of those songs, too, and will be discussed a little later.  The band’s fully acoustic performance of its own original ‘A Grave Mistake’ is yet another of the most notable of the re-issue’s additions.  It will be addressed shortly.  The record’s closer, which is a fully acoustic take of its original song ‘Thank God It’s Friday’ is notable in its own right, too.  It will also be discussed later.  All three songs noted here are important in their own way to the whole of the Silver Scream: Final Cut.  When they are considered along with the re-issue’s three other bonus tracks – an acoustic take of ‘Stabbing in the Dark,’ an acoustic take of ‘Savages’ and the previously unreleased tribute to Scream that is ‘Your Number’s Up’ – the whole of this record becomes a presentation that is one of the year’s top new music re-issues.

Ice Nine Kills’ new re-issue of its 2018 album The Silver Scream is one of this year’s top new album re-issues.  That is proven in part through the addition of the exclusive acoustic take of the band’s song ‘A Grave Mistake.’  Originally recorded earlier this year live on Sirius XM Radio, the song – which was inspired by the movie The Crow (which itself was inspired by the graphic novel of the same name) – develops its own new life and identity here.  That is due to the lack of the full on approach in the song’s electric take.  The decision to go only with the acoustic sound throughout gives the song a mournful feeling completely unlike that of its source material.  This is important to note because the full electric take does serve to illustrate the anger that Eric Draven felt when he came back to avenge his and his love’s murders.  This take though, touches more on the pain that led to that anger.  In turn, it gives the song (and story) even more depth than just the electric take by itself does.  To be honest, it actually is a better take than the song’s original, electric take because of this note, and will certainly become a favorite among the band’s audience base.  It is just one of the re-issue’s most notable works.  The band’s cover of Michael Jackson’s ‘Thriller’ is another work that is sure to become a fan favorite.

‘Thriller’ stands out because while the band does pay homage to Michael Jackson’s timeless work in terms of the song’s arrangement, the group also gives the song its own new identity here, too.  If anything, the band’s arrangement here almost instantly lends itself to a comparison to Alien Ant Farm’s take of Jackson’s ‘Smooth Criminal.’  That is meant in the most complimentary way possible.  It is nice to hear the combination of that tribute with the band’s own sound.  The band even pays tribute to the late, great Vincent Price through the addition of that spoken word portion of the song.  Given, nothing can ever top Jackson’s original take on the song, but this adaptation is still a work that listeners in general will enjoy for its own merits.  It is just one more of the works that audiences will enjoy here.  The band’s acoustic take of its original ‘Thank God It’s Friday’ is yet another addition to the album’s re-issue that audiences will appreciate.

The band’s acoustic take of its original ‘Thank God It’s Friday’ stands out because of its own arrangement.  Whereas the song’s original, full electric take is in intense, driving work, the song’s acoustic take is a much more engaging work.  That is because the minimalist approach here actually adds to the song’s ominous sense.  That is not to say that the song’s original arrangement is not foreboding and ominous.  Quite the opposite is the case there.  What is meant here is that that ominous, foreboding tone completely changes here in a positive fashion.  The group’s vocal approach changes with the song’s instrumental elements and adds even more to that tone.  In an odd way, the coupling of the song’s vocal and instrumental elements here illustrates even more, the sadness of the victims and almost makes Jason’s anger and fury understandable and worthy of sympathy, considering his death was caused by the counselors.  The end result of those deep feelings – thanks to the arrangement in whole – is a fitting finale for The Silver Scream: Final Cut and one more reason that audiences will appreciate the record.  When it is considered along with the band’s cover of ‘Thriller,’ its take of its original ‘A Grave Mistake’ and the other three bonus tracks that round out the record’s bonus content, the whole of the record proves itself one more of this year’s top new album re-issues.

Ice Nine Kills’ re-issue of its 2018 album The Silver Scream is a presentation that the band’s most devoted audiences will appreciate just as much as its more casual listeners.  That is due primarily to the bonus content featured in the record.  The six previously unreleased tracks featured in this re-issue give new life (no pun intended) to some of the songs featured in the album’s original release while also giving another song – Michael Jackson’s ‘Thriller’ – its own scary good new presentation.  Yes, that awful pun was intended.  When the bonus content featured in this record are considered with the originals from the album’s original release, the whole becomes a presentation that is one of the year’s top new album re-issues.  It is available now.  More information on The Silver Scream: Final Cut is available online along with all of Ice Nine Kills’ latest news and more at: