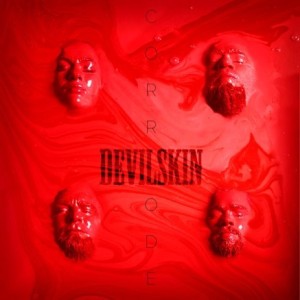 The band debuted the video for its new single ‘Corrode‘ Thursday.  The song is taken from the band’s forthcoming album Red.  The album is scheduled for release April 3.

The video for ‘Corrode’ presents the band performing its new single against a red, liquid wall of sorts, through which doubles of the band also perform the song.  At some points in the video, figures dressed in hazardous materials suits are seen walking down a hall, sometimes led by vocalist Jennie Skulander.

The song’s musical arrangement presents a sound that lends itself to comparisons to works from the likes of Halestorm.  The song’s lyrical content addresses the struggles of dealing with very negative thoughts and emotions, according to information in a news release distributed about the video.

The document states the song’s lyrical theme focuses on “being completely overwhelmed and submerged in grime and stress; Fighting your way through it all and rising to ask for help.”

Devilskin bassist Paul Martin talked about the creation of Red — the band’s fourth full-length studio recording — in a recent interview.

“We really took our time with Red,” he said.  “We had the vision and we knew it had to be done right.  The songs each have so much life, and we felt a real duty to do them justice.  There are some really personal and very real moments on this album.  We absolutely did not hold back.  There are songs about struggle, depression, suicide and loss, and there are songs about strength, hope, victory and love.  We demoed almost 30 songs for this album, so we had a lot of work to do to narrow the list down.  One of the last songs we wrote, it almost missed the cut, too, but the throat punch we call ‘Do You See Birds’ opens the album and sets the tone on a real rollercoaster of a ride.  We felt it was especially important to give the listener a total immersive experience from start to finish.  There’s lots of mood, colour and texture in the songs as well as between them.  It’s a trip.”

Pre-orders are open now for Red.  The album will be available physically, digitally and on vinyl.

More information on Devilskin’s new single, album and more is available online at: