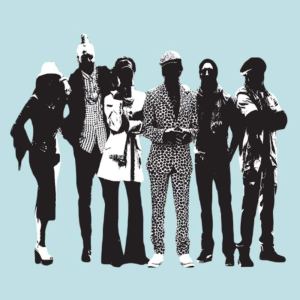 Late last year, veteran music collective Brooklyn Funk Essentials released its sixth full-length studio recording.  The 12-song record – Stay Good – is an aptly titled work.  That is because from start to end, it is a record that stays very good thanks to its collective musical and lyrical content.  Over the course of its 56-minute run time, the album proves to be a welcome return from the group for longtime audiences and an equally solid introduction for audiences who are less familiar with the group’s catalog.  One of the songs featured in the album that serves to illustrate that strength comes early in the record’s nearly hour-long run in the form of ‘Whatcha Want From Me. It will be addressed shortly.  Much later in the album’s run, listeners get another standout offering in the jazzy ‘Y Todavia La Quiero.’  This song will be addressed a little later.  ‘Funk Ain’t Over,’ which comes a little past the album’s midpoint, is another key addition to the album.  When it is considered with the other two songs addressed here and the rest of the album’s entries, the whole of the album proves to be a presentation that stays good long after the first listen.

Brooklyn Funk Essentials’ sixth album Stay Good is an offering that audiences will agree stays good from start to end thanks to its combination of musical and lyrical content.  That is proven early on in the form of the funky ‘Whatcha Want From Me.’ The song’s musical arrangement wastes no time engaging listeners with its retro disco/R&B arrangement.  The arrangement lends itself easily to comparisons to some of Stevie Wonder’s best works what with its horns, bass, percussion and keyboards.  The whole of the arrangement is infectious and works well with the song’s lyrical content, which as the song’s video seems to hint, is a statement about civil rights.

‘Y Todavia La Quiero’ (roughly translated, this means ‘And I Still Love Her’) is a seven-minute-plus instrumental track that is just as enjoyable as any modern jazz composition out there today.  Saxophonist Anna Brooks’ performance is comparable to some of John Coletrane’s most enjoyable bop tunes here while drummer Hux Nux Nettermalm’s timekeeping couples with the work of Iwan Van Hetten’s work on the keys and Foster’s work on the guitar to make the song in whole just as good as any work from the likes of Yellowjackets and Weather Report.  Why the group chose to title the song in Spanish likely has something to do with the story behind the song.  Either way, the overall arrangement from the group, with its polyrhymic patters and controlled energy, stands out completely unlike the rest of its counterparts on this album.  The end result is a song that proves once more that this group can handle many styles of music and do so successfully at that.  It adds so much to the album, and is one more wonderful accent to the record’s whole.  It is not the last of the record’s most notable tracks, either.  ‘Funk Ain’t Ova’ is another key addition to BFE’s latest album.

‘Funk Ain’t Ova’ is a full-on celebratory work both musically and lyrically.  The song’s musical arrangement once again takes listeners back to the golden age of funk and r&b, with hints of Sly & the Family Stone, Stevie Wonder (again) and so many great acts.  The group even sings proudly in the song’s chorus, “Funk ain’t ova.”  Looking at the rest of the song’s lyrical content, the group makes note, stating lines, such as “Is space eternal/What’s the speed of dark…Ain’t no passing phase/Out in space/Funk ain’t ova/So let me count the ways/In which I love it.”  The rest of the song continues in similar, celebratory fashion, lyrically speaking.  When that outright love of funk is considered along with the song’s equally danceable musical content, the whole of the song stands out that much more in the bigger picture of Stay Good.  When the song is considered along with the other songs noted here and the rest of the album’s entries, the whole of Stay Good proves to be a presentation that…well…stays good from beginning to end with each new listen.

Brooklyn Funk Essentials’ sixth full-length studio recording Stay Good is a work that stays good throughout its 56-minute run.  That is proven through the songs discussed here and their counterparts that make up the whole of the record.  The record’s musical compositions pay tribute to the greats of funk, soul and R&B while establishing their own identities along the way.  The record’s lyrical content ranges from the celebratory to the serious, never sticking to one topic too long.  All things considered, the combined content makes the record a work that stays good long after audiences’ first listen.  More information on Stay Good is available online now along with all of the group’s latest news at: