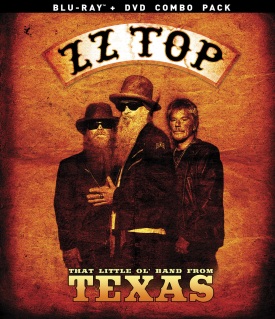 The wait is almost over for ZZ Top fans to own the band’s new documentary.  ZZ Top: The Little Ol’ Band From Texas comes home Friday on DVD/Blu-ray combo pack.  The 90-minute documentary, which is part of the band’s ongoing celebration of its 50th anniversary, is a presentation that ZZ Top’s most devoted fan base will appreciate, as will rock fans in general.  That is due in part to the doc’s main feature, which will be discussed shortly.  The bonus content that comes with the documentary adds even more appeal to its presentation, and will be addressed a little later.  The documentary’s average price point proves to be money relatively well-spent by those who purchase the documentary.  Each item is important in its own way to the whole of this doc.  All things considered, they make ZZ Top: The Little Ol’ Band From Texas a piece that is easily one of this year’s top new documentaries.

ZZ Top’s new documentary That Little Ol’ Band From Texas is a positive new presentation from one of the most respected and revered acts in the music business today.  Set for release Friday through Eagle Rock Entertainment and Banger Films, the 90-minute story takes audiences from the band’s early days coming up in the rich Texas music scene all the way up to the release of the band’s seminal album Eliminator, which remains today, the band’s best-selling album of all.  Along the way, audiences hear from the band and some of those who are close to the band, about its history and impact on the music industry.  Multiple mentions are made of the band’s late manager Bill Ham and his role in the band’s success, going from ‘That Little Ol’ Band From Texas’ to being one of the top names in the Texas (and music) world.  That is just one part of the story.  ZZ Top bassist Dusty Hill even addresses the moniker used for the band “That Little Ol’ Band From Texas” at one point, noting that he felt it was originally used in a negative sense against the band just because the trio was not like all the mainstream acts out there at the time. Hill’s further discussion that the band embraced the moniker rather than let it get to the band will put a smile on any viewer’s face.  On a related note, the band members’ discussions on the role that the rise of punk music (yes, punk music) had on its own approach to songwriting, too.  This is another key discussion for audiences to take in.  ZZ Top drummer Frank Beard also gets the opportunity to open up about his drug use and recovery.  That story alone is one of the documentary’s most interesting moments. That is because it is evident that Beard really was sincere about realizing what he had done to himself and his desire to clean up.  Clearly he walked the walk, as he got cleaned up.  Staying on that note, audiences will be entertained to learn how the band’s hiatus – during which Beard got cleaned up – led to the creation of the band’s now iconic image involving Hill and Gibbons’ beards.  Not to give away too much, but not everyone close to the band was happy with the band’s decision to take on its new look, though it turns out, one original naysayer admits, the band’s decision to go the long beard look turned out to be the right move in the long term.  This is just one more of the engaging and entertaining stories that is shared throughout the course of ZZ Top: That Little Ol’ Band From Texas.  The documentary is chock full of other material, including a discussion on the advent of MTV on the band’s fame, that audiences will appreciate.  Even as the credits roll, audiences get even more story, with the band’s members today sitting at a table at Gruene Hall in New Braunfels, TX, looking back on the band’s history and its future.  So even though the documentary ends with the band reaching its apex in 1983, the story does not necessarily end there.  That should appease even the most devoted of the band’s fans.  Keeping all of this in mind, the story at the center of ZZ Top: That Little Ol’ Band From Texas forms a solid foundation for the documentary.

The bonus content that accompanies the documentary’s main feature builds on the foundation that the noted story forms in its own presentation.  The doc’s bonus content comes in the form of two separate “live” performances – one at Gruene Hall and the other is a set of vintage live performances culled from the Ham Estate archives.  Audiences get to see in the latter, ZZ Top in its infancy, sans beards.  The five-song collection, which features performances of ‘Thunderbird,’ ‘Tush,’ ‘Beer Drinkers & Hell Raisers,’ I’m Bach, I’m Nationwide’ and ‘Manic Mecahnic’ are in themselves bonuses in every sense.  The footage, as old as it clearly is, has stood the test of time.  Even having been recorded before the days of high definition video and audio, it still looks and sounds wonderful.  The band’s rhinestone suits in the performance of ‘Thunderbird’ are fully visible while the audio is wholly clean.  The vintage performance of ‘Tush’ is just as enjoyable as that of ‘Thunderbird,’ its audio and video being just as clear, even despite the recording technology of the day.  It is clear throughout the footage, that the performances all came from the same show, though it is not specifically noted when and where the show was recorded.  However, noting the band’s beards, it was from after the band’s hiatus.

By comparison, the newer, more recent footage recorded at the Gruene Hall was clearly recorded in the last year or so.  The cinematography and sound are stunning for such an intimate set of performances.  There is no audience, or at least not that is visible or audible.  Gibbons’ vocals are just as strong as ever, and the talents of Beard and Hill have not faded in the least, either.  Between that footage and the vintage footage, audiences get in whole, nearly an hour of live and semi-live performances that is well worth taking the time to watch.  When this is considered along with the value of the documentary’s main feature, the combination of that primary and secondary content more than makes this presentation worth owning by any rock music fan and ZZ Top devotee.

Taking into account the importance of the collective content featured in ZZ Top: That Little Ol’ Band From Texas, it goes without saying that while the documentary is not necessarily cheap, the presentation’s average price point is a note that the noted audiences will not mind paying.  The average price point for this documentary is $26.28.  That price is reached by averaging prices from listings at Amazon, Target, Best Buy, Barnes & Noble Booksellers and Books-A-Million.  At the time of this review’s posting, the documentary was not listed at Walmart’s site.  Again, the price is not inexpensive, but it could have been worse.  Considering the amount of content that is featured in the documentary, roughly an hour and ten minutes total, counting the bonus content, that price of just under $30 is not that bad.  Best Buy, Target and Amazon all list prices below that point at $22.99, $$25.49 and $22.93 respectively.  Meanwhile, Barnes & Noble Booksellers and Books-A-Million both break that crest at $29.99 and $29.98 respectively.  So again, even with an average price point of $26, the least of the documentary’s separate price listings are just below that level, proving themselves to still be relatively affordable.  Keeping all of this in mind, the money spent on ZZ Top: That Little Ol’ Band From Texas is money that audiences will not regret spending.  Keeping this in mind along with the value of the documentary’s collective content, the whole of this presentation, ZZ Top: That Little Ol’ Band From Texas proves to be a big hit for the band’s most devoted fans and for rock fans in general.

ZZ Top’s new forthcoming documentary That Little Ol’ Band From Texas is a presentation that will appeal to a wide range of audiences.  That is due in no small part to the documentary’s primary content, which tells a deep, rich story of one of the music industry’s most respected and revered bands.  The bonus live performances that accompany the documentary adds its own share of engagement and entertainment value to the presentation.  The presentation’s average price point and separate listings round out its most important elements.  Each noted item is important in its own right to the whole of this documentary.  All things considered, they make ZZ Top: That Little Ol’ Band From Texas a big hit.  More information on the documentary is available online now along with all of the band’s latest news and more at:

More information on this and other titles from Eagle Rock Entertainment is available online at:

2 thoughts on “‘ZZ Top: That Little Ol’ Band From Texas’ Is A Big Hit”