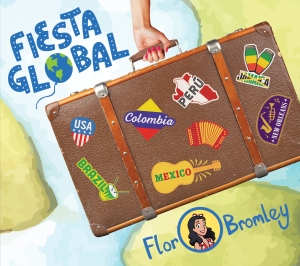 Family entertainer Flor Bromley is scheduled to release her new album Fiesta Global Friday, and this 11-song record is a presentation that deserves to be celebrated in itself.  That is due in part to the record’s diverse musical styles presented throughout the course of the 36-minute record.  This will be addressed shortly.  The lyrical topics presented throughout the record are important in their own right to the whole of the record, and will be discussed a little later.  The record’s sequencing rounds out its most important elements, and will also be discussed later.  Each item noted here is important in its own way to the whole of Fiesta Global.  All things considered, they make the 11-song album an enjoyable sophomore offering from Bromley.

Flor Bromley’s latest full-length studio recording Fiesta Global is a presentation that audiences of all ages will celebrate upon its release on Friday.  That is due in large part to the diverse musical stylings presented throughout the album.  It goes without saying that this record offers quite a bit of musical diversity for audiences.  One of the record’s most intriguing musical arrangements comes late in its run in the form of ‘Salta.’  The song is Latin at its roots.  However, the approach used here with the horns, guitars and hand drums (bongos) actually lends itself to thoughts of ska (yes, ska) just as much as Latin music.  It seems quite the odd hybrid, but it works so well here and is well worth hearing.  ‘Fiesta,’ the record’s opener takes audiences to the streets of Brazil with its Samba-rich arrangement.  It is a far cry from the sound of ‘Salta’ needless to say, but no less entertaining.  ‘Balloon Party,’ which features a guest appearance from Bromley’s fellow family entertainer Jazzy Ash, takes listeners away from Brazil and to the streets of New Orleans with its celebratory Dixieland-style arrangement, complete with trombone and light, bouncy beat on the snare.  As if all of this is not example enough of the musical diversity exhibited throughout Fiesta Global, ‘Superheroe,’ which immediately follows ‘Balloon Party,’ offers audiences a catchy, driving, guitar-centered punk rock style work, is just as far from the already noted songs as they are from it and one another.  Moving from the American rock scene, Bromley also takes listeners on a musical journey down to Columbia through the arrangement featured in ‘Lalalalala (Cumbia),’ which features another of Bromley’s fellow family entertainers, 123 Andres.  Between this arrangement, the others noted here and the rest of the unnoted arrangements, the whole of the album’s arrangements more than proves why the record’s arrangements are key to the album’s presentation.  They are in themselves, their own celebration of the world and its interconnectivity.  They are just one part of what makes Fiesta Global stand out in this year’s field of new family music releases.  The lyrical themes featured throughout the record are just as important as its musical arrangements.

Early on in the album’s run, Bromley takes on the issue of immigration and America’s cultural diversity in the album’s second song, ‘We Came To America.’  She reminds audiences in the simplest of terms that anyone can understand.  Right from the song’s outset, she sings, “We came to America/Every color, race and religion/From every country in the world/We came to America/Some of us were already here before the others came.”  From there she makes mention of people coming by boat and plane from so many points around the world.  The key here is that she comes right out and makes her statement, but does so in a not-so-forceful fashion as she reminds listeners that we should accept and appreciate one another.  The note that some people’s ancestors were even here before others is strong even in its subtlety.  She is to be especially applauded for that approach.  The fact that she took on the matter of immigration in such polite and professional fashion in a time when the matter of race and immigration is such a hot-button issue makes this song that much more admirable and her deserving of praise for tackling the matter, and for doing so in such fashion.  Bromley doesn’t stick to just the serious in her songs’ lyrical content.  She also proves she is able to get loose and have a good time in the celebratory update on Richie Valens’ timeless song ‘La Bamba,’ this time out just calling it ‘Bamba.’  The song features a guest appearance by Claudio Vega.  As another example, ‘Otono’ is another basic work that shows Bromley’s lyrical reach on this record.  It is a simple work that celebrates all the great things about the season of fall.  It’s another topic that can and certainly will bring the whole family together with such joy, and just one more way in which the album’s lyrical themes prove to be just as important to its whole as the record’s musical content.  For all that the album’s overall content does for its presentation, it is collectively just one part of the positivity in the album’s whole.  The record’s sequencing rounds out the most important of the record’s elements.

Fiesta Global starts off with high energy in ‘Fiesta,’ but gradually starts pulling back from there in terms of its energy.  ‘We Came To America’ for instance, is hardly the high energy piece that its predecessor is.  In fact, it is quite reserved by comparison, but still has a certain amount of energy in its own right.  Bromley picks things up considerably from there in ‘Lalalalala (Cumbia)’ before really pulling the record’s energy back yet again in ‘Vida.’  Interestingly enough, the energy goes right back up from there as the album makes its way into ‘Bamba’ and continues through ‘Panuelo’ before finally pulling back again in ‘Otono.’  That reserved vibe only lasts for so long before the album progresses into ‘Salta’ and gets listeners moving all over again.  ‘Balloon Party’ keeps the energy moving as it gives way to ‘Superheroe.’  Even as the album reaches its finale in the fully Spanish take of ‘We Came To America’ the energy doesn’t pull back but so much, giving audiences a comfortable final statement.  Looking back, audiences will note that the sequencing of Fiesta Global is important to its presentation because it keeps its energy rising and falling nonstop throughout.  That plays just as much into the record’s engagement as the record’s content.  That is because if its energies had stayed too reserved for too long, it would not have taken long for the record to lose listeners.  That diversity, that up and down throughout, keeps things fresh and entertaining throughout the album, in turn, adding to the interest.  When that interest is considered along with the engagement and entertainment generated through the song’s content, the end result is a presentation that, again, is deserving of its own celebration by listeners.

Flor Bromley’s latest LP Fiesta Global is a work that is well deserving of being celebrated in its own right among this year’s new family music albums.  That is proven in part through the album’s diverse musical arrangements, which are themselves a celebration of so many different cultures and peoples.  The lyrical content offers its own share of diversity, as is pointed out here.  The same can be said of the record’s energies throughout its sequence.  Each item noted is important in its own way to the whole of the album’s presentation.  All things considered, Fiesta Global proves itself to be among the best of this year’s new family music albums.  More information on the record is available online along with all of Flor Bromley’s latest news at: