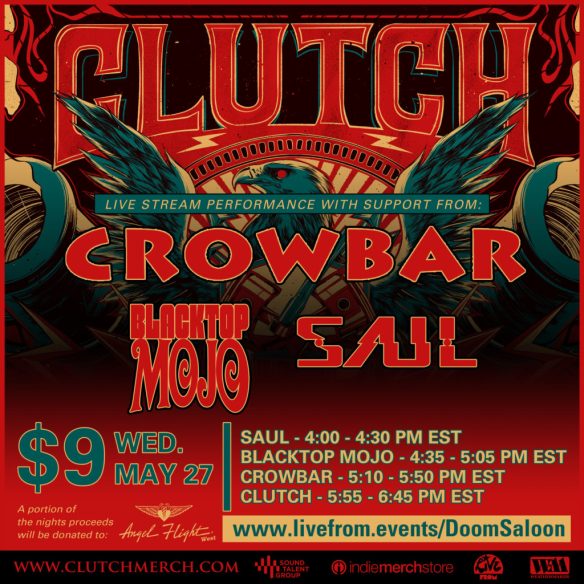 The band will perform a streamed concert May 27 titled “Live From The Doom Saloon Volume 1.  The concert, which will raise money for the nonprofit agencies MusiCares and Angel Flight, has been produced in conjunction with Sound Talent Group and LiveFrom Events.

Clutch’s concert, which is on the back of its new Weathermaker Series and its 2018 album Book of Bad Decsisions, will be available for On Demand viewing starting at 4 p.m. EST on May 28.  It will be available to watch until May 30.  Tickets are available for the May 27 show here.  The ticket price — $9 — will remain the same for the concert’s On Demand stream as for its live stream.

Crowbar, Blacktop Mojo and Saul will join Clutch as support for the concert.  Their performances will be held remotely.

MusiCares is a nonprofit that provides financial assistance to musicians for items, such as medical bills, rehabilitation resources and general financial aid.

Angel Flight is a network of volunteer pilots that free air transportation for people in need of medical treatment far from their homes, but who cannot afford the flights.

More information on Clutch’s upcoming concert is available along with all of the band’s latest news at: