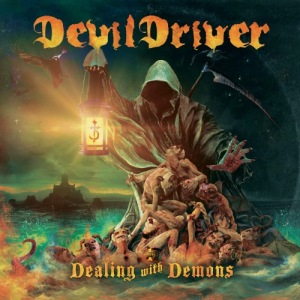 Audiences received their first preview of Devildriver’s next album this week.

The band — Dez Fafara (vocals), Mike Spreitzer (guitar), Neal Tiemann (guitar), Diego Ibarra (bass) and Auston D’amond (drums) — debuted the lyric video for its new single ‘Keep Away From Me‘ Thursday.  The song is featured in the band’s forthcoming album Dealing With Demons 1, which is scheduled for release Oct. 9 through Napalm Records.  The album is the first in a two-part release that will see its second half released at a later date.

‘Keep Away From Me’ features a musical arrangement that combines metalcore and death metal elements for a whole that will engage and entertain a wide range of listeners.  The song’s lyrical theme is personal for Fafara and uses his personal connection to relate to listeners as they navigate the waters of everything happening in the world today.

Fafara discussed that theme in a recent interview.

“I’ve been social distancing since I was born,” he said. “I’ve learned to try and embrace my Agoraphobia all my life. This is what the lyrics are about as we are all sheltered in place. They seem very clear. Now is not the time bands should shy away from the obvious by trying to push the narrative through their art as if everything is alright with the world and ‘it’s metal video visual as usual time’, as it is clearly NOT that time.”

We as artists should speak up, inspire and change lives, or paint a picture – a time capsule if you will – by the narrative we push in uncertain times,” he added. “This video is one such art piece as my band and thousands of others are forced into quarantine – cannot rehearse, take photos, or perform – to make a music video for the very people that have supported us for years. It’s trying times for the world and my outlook through this video is simply this: ‘here’s what we are going through as a family on this planet and as we embrace what is yet to come… please Stand Together’.”

Dealing With Demons I Tracklist:
1. Keep Away From Me
2. Vengeance Is Clear
3. Nest Of Vipers
4. Iona
5. Wishing
6. You Give Me A Reason To Drink (feat. Simon Blade Fafara)
7. Witches
8. Dealing With Demons
9. The Damned Don’t Cry
10. Scars Me Forever

Fafara expanded on the record’s writing process in the noted interview.

“It’s time to lay it all out, on two records,” he said.  “I’m never gonna revisit these subjects again. I’ve been writing about this sort of human nature, disloyalty and dishonesty, love and loss, since the beginning of my career. I am going in a more lyrically woke direction in the future. A lot of people say my music gives them strength. But what they don’t realize is that these topics haunt me. Over the course of these last few years we fled from wildfires, my wife battled cancer and now we are going through a pandemic… so it is what it is… let’s dump it all on the table and purge. I want to go through different topics in the future, so here we are now. I’ve laid it all out on a double record for all of you to hear.”

Additionally, he commented on the writing process for Dealing with Demons 1‘s forthcoming companion record.

“Volume two will get into some very heavy topics as well,” he said.  “You’ll see the band progress even further musically as we finish this ode to the purge of all things Demonic.”

More information on Dealing With Demons 1 is available along with all of Devildriver’s latest news at: