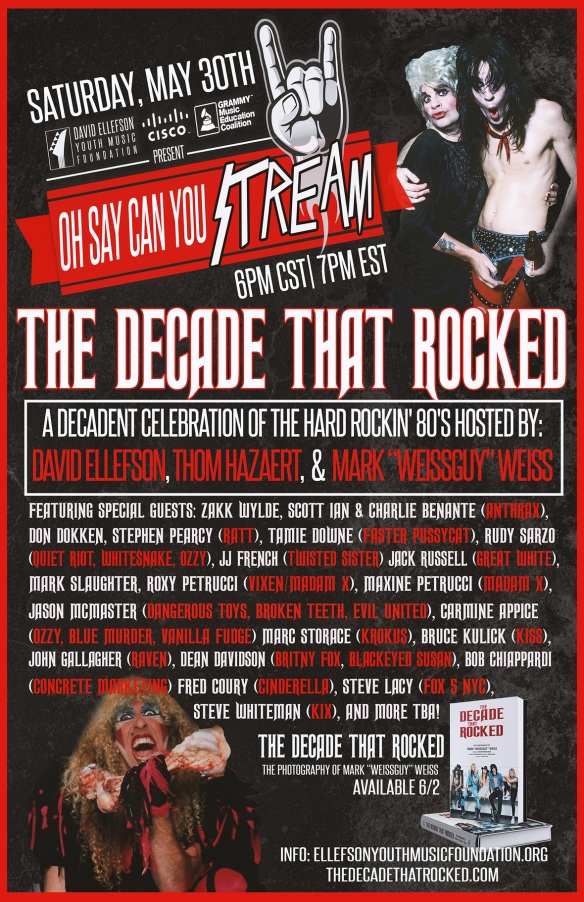 David Ellefson will welcome a special guest this weekend for the latest installment of the David Ellefson Youth Music Foundation’s “Oh Say Can You Stream” series.

Weiss’ appearance on the latest episode of the “Oh Say Can You Stream” series is in support of his new book The Decade That Rocked: The Photography of Mark “Weissguy” Weiss.  Scheduled for publication June 2 through Insight Editions, the nearly 400-page book features more than 700 images captured by Weiss during the course of his career, such as those of Ozzy Osbourne, Motley Crue, Guns N’ Roses, Van Halen and Judas Priest.  Speaking of Judas Priest, the book features a forward penned by famed Judas Priest front man Rob Halford.

Weiss’ accolades are not limited to his photography work.  He is also known for his role in the creation of album art for records from acts, such as W.A.S.P., Bon Jovi and Anthrax.  He also had a hand in some of the exhibits displayed at the Rock and Roll Hall of Fame and the Grammy Museum.

The first two episodes of the “Oh Say Can You Stream” series generated more than half a million viewers collectively.  Saturday’s edition of the series will feature an eBay auction that itself will feature items, such as signed Weissman prints, and clothing and gear worn and used by Ellefson on stage.  Audiences can see the full list of items up for auction here.

A trailer for Saturday’s show is available here.  Saturday’s edition of “Oh Say Can You Stream” will be available to watch at all of the sites listed below.

More information on the David Ellefson Youth Music Foundation is available along with all of the agency’s news at: