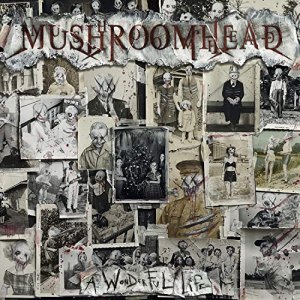 Hard rock band Mushroomhead has had quite an interesting life since its formation almost 30 years ago (27 years to be exact).  In the nearly three decades since its formation, the band has seen so many lineup and label changes that audiences almost need a program to keep track of all the changes.  The band also had that much talked about feud with fellow masked metal outfit Slipknot as well as apparently its own internal feuds, which led to a number of the band’s lineup changes.  Of course for all of the challenges that the band has faced, it has still managed to push on and release new music as much as possible for audiences.  On Friday, the band will release its eighth album, titled A Wonderful Life.  The 17-song record’s release will end a six-year-plus drought for the band, the longest time that the band has ever gone without releasing a new album.  The wait for the album was worth it, as has already been proven through the album’s two current singles, ‘Seen It All’ and ‘The Heresy.’  As impressive as those songs are, both musically and lyrically, they are just two of the album’s notable entries.  ‘Madness Within,’ which comes very early in the album’s run, is notable in its own right.  It will be addressed shortly.  ‘The Flood,’ which comes late in the album’s run, is another example of the album’s strength.  It will be addressed a little later.  ‘Another Ghost,’ one of the album’s bonus songs, is yet another example of why the record was worth the wait.  It will also be discussed later.  When it is considered along with the other songs noted here, other songs featured in the album, such as the instrumental ‘To The Front’ (another of the record’s bonus tracks), the two aforementioned singles and the rest of the album’s songs, the whole of the record proves itself to be among the best of this year’s top new hard rock and metal albums.

It goes without saying that longtime fans of the Cleveland, OH-based hard rock/metal band Mushroomhead have anxiously awaited this week for a long time.  They have waited more than six years, as a matter of fact.  The wait was worth it, as is evidenced through the record’s collective musical arrangements and lyrical themes.  ‘Madness Within,’ the album’s second entry, is just one of the songs featured in the record that supports the noted statements.  The song’s arrangement is grounded in a steady eighth note beat from drummer and sole remaining founding member Steve “Skinny” Felton.  What’s really interesting to note here is his use of the triplet pattern on the floor tom against the song’s seeming 2/4 time.  It makes for an interesting dichotomy that adds to the arrangement’s impact.  Vocalist J Mann joins in shortly thereafter with an equally rhythmic delivery that almost sounds like rapping in a sense.  That buildup to the song’s full musical onslaught does a lot to engage and entertain audiences.  It ensures just as much, those listeners’ engagement and entertainment throughout the song’s nearly four-minute run.  Adding even more interest to the song’s arrangement is the use of the keyboards and electronics.  Their addition to the whole gives the song a bit of a Marilyn Manson-esque vibe while new vocalist Steve Rauckhorst’s vocal delivery adds its own touch to the whole.  Going through all of this, it would seem that there’s a lot going on here, and there really is.  However, the band’s ability to balance it all makes for an impact that makes this song a viable choice for another single if only for this reason.  Of course, the song’s musical arrangement is only a part of what makes it stand out.  The song’s lyrical theme plays against the energy exuded by its arrangement to add to the song’s overall impact.

The lyrical theme presented in ‘Madness Within’ comes across as a commentary of sorts as to everything going on in the world.  That is inferred as it states in its lead verse, “It feels like the weight of the world/Is constantly pulling it down/Breaking and buckling and shaking this fucking whole goddamn thing right to the ground/You call this fucking crazy?/I’ve seen it all before/Half withdrawn and carrying on like there’s no reason to be alive anymore/All unwell are welcome one and all/The insane and the strange, invited all the same.” The noted seeming commentary is inferred even more as the song continues in its second verse, “Postcards from the funny farm/Regurgitated call to arms/The echoes of the past begin to sing/The age of reason’s come and gone/Into oblivion and beyond/Await with terror what tomorrow brings/Embrace the cage or plot your escape.”  Taking all of this into consideration along with the song’s chorus, which states, “We’re on the verge of total destruction/Yet still too self absorbed to care/Can’t speak can’t think, can barely function/Its hard to tell if we’re even there/MADNESS/It’s just our personal insanity taking hold/Cash in, it’s time to fold/Surrender to the madness within,”, that seeming commentary becomes even more certain to be the topic.  This comes across as a clear statement about everything happening; another welcome reminder about the point to which the world has come.  Together with the song’s infectious musical arrangement, the song proves itself to be yet another notable statement as to the strength of A Wonderful Life.  It will be no surprise when this song becomes another of the album’s next singles.  It is just one of the album’s most notable works.  ‘The Flood’ is another notable addition to the album.

‘The Flood’ stands out because of the juxtaposition of its musical arrangement to its lyrical theme.  The song’s musical arrangement is a subtle presentation that is so heavy because of its subtlety.  One can actually argue that there is a bit of a Tool influence infused into the composition, which is based in its keyboard line.  The string arrangements, bass line and even more subtle guitar line work alongside the song’s vocals to make the whole such a surprisingly engaging and entertaining opus.  It’s not necessarily a brooding work, but it definitely will keep listeners’ attention with its overtly contemplative nature.  That alone makes this song another impressive addition to A Wonderful Life.  As noted already, this composition is a direct contradiction to the song’s lyrical theme, which adds even more interest to the song’s whole.

The lyrical theme featured in ‘The Flood’ is important to examine because of its defiant statement and the fiery way in which that message is delivered.  It is in direct contrast to the mood set by the song’s musical arrangement, yet somehow works so well alongside said composition and makes the song in whole that much more powerful.  The commentary is inferred right from the song’s outset  as the leaf verse states, “Please accept this life we’ve prepared for you/All of the ways we’ve taken care for you/Is this not something that they expected you to do?/How could you not want your destiny handed down to you?.”  The commentary continues in the song’s second verse, which states, “Reject this life that’s prepared for you/All of the ways we’ve taken care for you/How dare you not do what’s been demanded of you?/Sit back, relax/The only way out is through/They leave a trail of betrayal and breadcrumbs/As they lie right to our face/Referendums, pending trials and headstones/Broken promises at traitors gate.”    The final commentary comes in the song’s third verse, which reads, “While you make believe/Let us make all of your dreams come true/For just a small fee/We can provide the perfect life for you/Can we change/Can we rearrange/Plague of insanity/Fate of humanity/No comprehension/No understanding/In all our vanity our tragic fallacy/As they lie right to our face.”  This is a powerful, incendiary statement about how society is being controlled and how we as a society need to stand up and not let itself be controlled by the powers that be.  Again, coupled with the song’s unique musical arrangement, the song in whole stands out even more among the record’s body.  It becomes yet another notable potential single for the band and one more example of what makes A Wonderful Life such a welcome return for Mushroomhead.  It still is not the last of the album’s most notable works.  The album’s deluxe edition features four bonus tracks.  One of those songs – ‘Another Ghost’ – is another of the album’s most notable works.

‘Another Ghost’ starts off very subtly with a gentle piano line set against J Mann singing so softly,  “Somewhere between where your birth and death collide Buried beneath all the darkest thoughts inside Stripped of the last ounce of your pride I tried to make you proud.”  This leads into the song’s full-force, percussive arrangement, which comes out like a firework exploding considering that soft opening.  The result, especially considering the song’s lyrical content, makes the song another key addition to the album.

The lyrical content featured in this song is important because, as was the case in ‘The Flood,’ it just doesn’t seem to fit with the music, but yet still works with said material.  The song seems to be one of those brooding works, this time seemingly being about someone’s relationship perhaps with a parent.  This is inferred through the noted introductory lines and continued in the lead verse, which states, “Somewhere between where your birth and death collide/Buried beneath all the darkest thoughts inside/Stripped of the last ounce of your pride I tried to make you proud.”  That seeming theme is inferred just as much in the song’s second verse, which states, “Embracing the dawn or facing the fall/Living or dying or racing toward it all?/You’ve never seen me, not the real me/I’m just another ghost/Lost and alone wondering where it all went wrong.”  Again, this seems very much like someone who is contemplating a lot of personal thoughts related to personal experiences with another person.  It just doesn’t seem to fit with the fiery energy in the song’s musical arrangement.  Typically such thoughts are associated with more brooding sounds.  Now given, there is some brooding, but this is more the anger side of that brooding, and in turn, makes the song hit so hard alongside its lyrical counterpart.  Keeping all of this in mind, the song becomes a very strong presentation, and just one more example of why A Wonderful Life is such a welcome return from Mushroomhead.  When it is considered along with the other songs addressed here, the likes of the instrumental bonus track ‘To The Front,’ the album’s two current singles and the rest of the LP’s songs, the album in whole becomes easily one more of this year’s top new hard rock and metal albums.

Mushroomhead’s forthcoming eighth album A Wonderful Life is a well-titled presentation.  That is because it is a wonderful new offering from the veteran hard rock band.  That is because the musical arrangements featured throughout the record all present the band’s familiar, trademark dark, melodic sound.  At the same time, the arrangements are not just copy and paste rehashings of the band’s existing arrangements.  Rather, they are examples of growth from the band.  The lyrical themes that accompany those engaging and entertaining arrangements add even more interest to the record, as has also been proven here.  Whether through the trio of songs examined here or through any of the album’s other works, the album in whole proves itself another unique addition to this year’s already crowded field of new hard rock and metal albums.  It is so unique in its presentation that critics will agree it deserves its own spot on their lists of the year’s top new hard rock and metal albums.

More information on Mushroomhead’s forthcoming album is available along with the band’s latest news at: