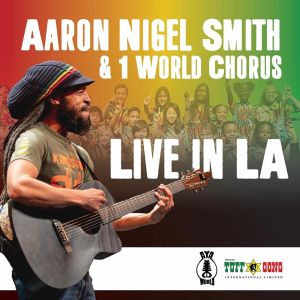 Smith is scheduled to release Live in LA Aug. 15 digitally through Aya World Productions and Bob Marley’s Tuff Gong International.  He will be joined by the 25-member 1 World Chorus children’s choir, which he founded, for the recording.

Smith talked about working with the choir in a recent interview.

“These kiddos really show up in a positive and enthusiastic way,” he said.  “Their energy helps to create such a great vibe throughout the concert. It is also meaningful to document a performance where my son plays such a key role. It’s a proud poppa moment for sure.”

A trailer for the forthcoming recording is streaming here.

Along with having founded the 1 World Chorus, Smith is also known for having created the Emmy Award-winning PBS Kids series Between The Lions.

Originally recorded last year during a performance at The Broad Stage in Santa Monica, CA, the recording presents Smith and company performing some of the most well-known songs that Smith has recorded over the course of his 20-year career.  Among the most notable of the performances featured in the recording is a solo performance from Smith’s son, Zion Lion.

More information about Aaron Nigel Smith’s forthcoming live recording Live in LA is available along with all of his latest news at: