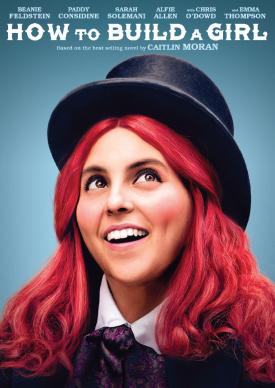 IFC Films has a new coming-of-age story on the way next month.

How To Build A Girl is scheduled for release Aug. 11 on DVD.  Starring Beanie Feldstein (Neighbors 2: Sorority Rising, American Crime Story, What We Do In The Shadows) as 16 year-old Johanna Morrigan, the movie — based on the book by the same name by author Caitlin Moran — follows the young teen as she uses her imagination to escape her reality in Wolverhampton and live out her fantasies.

Things take a turn for the surprising when Johanna sends a music review to a group of self-important, hipster rock critics at a weekly music magazine.  She ends up reinventing herself as Dolly Wilde, who is apparently self-important in her own right, and who has a lust for fame, life and men.

The result of her change leads her to her own existential crisis.  She starts asking herself is the persona she has created the person she wants to be or does she need to start over again?

More information on this and other titles from IFC Films is available at: