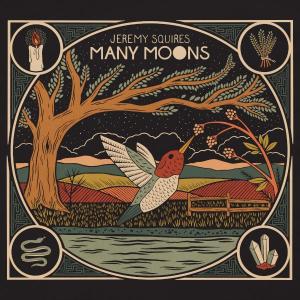 Squires debuted the video for his new single ‘Cast Spells‘ Thursday.  The song is the lead single from his forthcoming album — his tenth — Many Moons.  The video features a variety of visuals, such as a fair/theme park setting, a forest, and a person skateboarding, used to illustrate the song’s lyrical theme.

Squires addressed the song’s lyrical theme in a recent interview.

“Cast Spells” reflects the dichotomy of emotions,” he said. “You can feel both pain and love simultaneously; you can feel intense emotions and still be soft spoken. Human feelings are complex and I like to convey that in my poetry or songs.

The song’s subtle, reserved musical arrangement reflects that statement well.  It is just Squire performing on his guitar while singing the song’s melancholy lines.

“When I wrote ‘Cast Spells,’ I had originally intended for it to be an acoustic song and a duet,” he said. “Over time I felt the song could be opened up more and I started playing around with different soundscapes and textures. Ultimately the song evolved into what it is now.”

Many Moons‘ track listing is noted below.

More information on Jeremy Squires’ new single, video and album is available along with all of his latest news at: