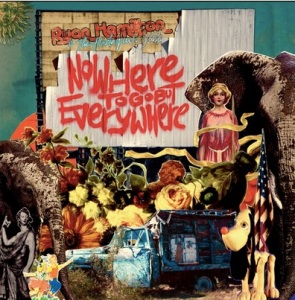 Ryan Hamilton & The Harlequin Ghosts debuted the video for its latest single this week.

The album is scheduled for release Sept. 18 through Wicked Cool Records.  Pre-orders are open now.

The ‘Oh No (ft. Kay Hanley)’ video places the song’s lyrics over a continuous stream of Hamilton in a variety of positions in front of a blue drop cloth backdrop.  The song’s musical arrangement is an upbeat, poppy composition that will get stuck in listeners’ heads.  Its lyrical theme is just a celebration of mainstream music that features tributes to acts, such as Prince, Beck, and Bruce Springsteen.

Speaking of Bruce Springsteen, Wicked Cool Records is owned by Steven Van Zant, who is a member of Springsteen’s E Street Band.

Hamilton offered a brief statement about the song’s lyrical concept.

“I’m super proud of the concept of this song. Flipping all those classic songs on their heads. Plus, I got to sing it with my friend Kay,” he said.

In other news, Hamilton recently recorded a documentary during a cross-country trip across America.  The trip was a result of his divorce from his ex-wife.  Hamilton took America’s famed Route 66 for his trip.  The documentary — “Communique” — saw its first segment debut Wednesday through Glide magazine.

Hamilton said of his journey, “While it was magical to take that storied route, it was more like driving through a graveyard version of what once was,” said Hamilton. “Though ominous, it was still darkly beautiful.”

More information on the group’s new single and video is available along with its latest news at: