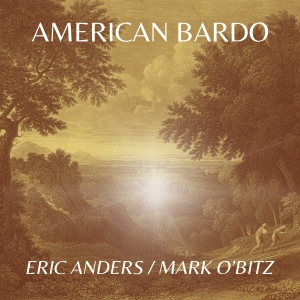 Eric Anders and Mark O’Bitz released last month what is one of the most intriguing new albums of 2020 in their new album American Bardo.  The duo released the 12-song record (its third together) through independent label Baggage Room Records.  The record’s interest comes in part through its overall lyrical presentation, which will be discussed shortly.  Its musical arrangements build on the interest generated by the lyrics.  They will be discussed a little later.  Its sequencing rounds out its mot important elements, and will also be discussed later.  Each item noted here is important in its own way to the whole of the album.  All things considered, they make this independent album well worth hearing at least once.

American Bardo, the new release from Eric Anders and Mark O’Bitz, is a unique presentation that is well worth hearing at least once.  That is due in part to the album’s unique lyrical concept.  The album’s concept in question is based on author George Saunders’ 2017 historical fiction novel Lincoln in the Bardo.  According to information available about the novel, it follows the events of the death of Abraham Lincoln’s son William Wallace Lincoln.   This critic will admit to not having already read Saunders’ novel, which earned a spot on the New York Times Bestsellers List 2017 and earned the 2017 Man Booker Prize.  Even with that in mind, the fact that a musical performer from any genre would base an entire album on a book is, while not unheard of, still rare.  Books are more commonly adapted to the silver screen.  What’s more, that Anders and O’Britz would adapt such a story for a concept album is even more original.  Add in that each song is centered on a specific character from the novel makes for even more interest for audiences.  The stories, with their melancholy takes are certain to keep listeners engaged and entertained.  What’s more, they are just as likely to get people interested enough to want to learn more about each character, and in turn, buy the book or check it out at their nearest library.  It should be stressed that the stories featured within each song are melancholy to say the absolute least.  To that end, listeners will need to be in a very specific mindset in order to appreciate the album in that aspect.  If they are in said mindset, then they will be able to appreciate the noted content.

Staying on the note of needing to be in a specific mindset in taking in the album, the record’s musical content requires that mindset, too.  From start to end, the album’s musical content is extremely melancholy.  It opens with a deeply introspective style composition that lends itself easily to works from Blues Seraceno, only with more of a melancholy edge.  The moody nature of the album’s musical content continues just as strongly in the record’s second song, ‘Bury Me.’  This song’s arrangement goes right with its extremely deep lyrical content, which finds Anders singing, “bury me/With the love that I know/It keeps me alive/Say goodbye/Bury me.”  Once again, this is another way in which this record’s musical content is just as reserved as its lyrical content.  As the album nears its midpoint, it presents an arrangement that would fit perfectly with Shooter Jennings’ 2010 album Black Ribbons, what with the minor chord-driven, subtle piano line, equally subtle drumming and airy vocals.  The vibe established in this son continues throughout the rest of the album’s 53-minute body.  Keeping that in mind, the album’s musical arrangements require listeners just as much, to be in a specific mindset as the album’s lyrical content.  That is going to limit the album’s appeal, but does not necessarily make it a failure.  It just means that listeners cannot just listen to it at any time.  When audiences do take in they will appreciate all of the musical content and one more of the album’s aspects, its production.

The production that went into the creation of American Bardo is well worth examining because of its impact on the album’s general effect.  Whether it is the balance of all of the elements in the album’s fifth track, or the ambience created in ‘Judgment Day,’ which comes later in the album’s run, or even the subtle intensity in the album’s opener, there is so much going on in each song.  Those behind the glass brought out the best in each arrangement, resulting in a maximization of each song’s impact.  From the smallest aspect, such as the organ in ‘Bardo Con’ to the balance of the guitar and tambourine in ‘My Love’ to the ethereal sound of Anders’ vocals in ‘Holding Will,’ every aspect big and small is expertly utilized throughout the album.  It demands that those who do listen to the album, do so closely.  Keeping this in mind along with the impact of the album’s musical and lyrical content, all three elements come together to make American Bardo quite the interesting presentation.  It is a presentation that though it limits itself, still is worth hearing at least once.

Eric Anders and Mark O’Bitz’s latest album American Bardo is one of the most unique of this year’s new albums.  It is a record whose overall lyrical content is not necessarily the happiest.  Even with that in mind, when listeners are in the right mindset, its lyrics – which are based on characters from George Saunders’ award-winning novel Lincoln in the Bardo – will deeply impact them.  Much the same can be said of the album’s musical content as its lyrical content.  The musical arrangements are largely very melancholy, so they require listeners to be in a specific mindset in order to be fully appreciated.  This will limit the album’s appeal even more, but does not make the album a failure.  The record’s production adds even more impact to its general effect.  When it is considered along with the album’s overall content, all three elements join to make the album an interesting presentation that is worth hearing at least once.  It is not the best of the year’s new albums or even independent albums, but is sill a powerful presentation in its own right.  It is available now.  More information on American Bardo is available along with all of Eric Anders and Mark O’Bitz’s latest news at http://andersobitz.com.