The Veer Union debuted the video for its latest single over the weekend.

The band debuted the video for its new single ‘Slaves to the System.’ Friday.  The song and its video feature a guest appearance by Defending Cain front man Brandon Wright.

The ‘Slavs to the System’ video features the group in a semi-lit backdrop as it performs its new melodic hard rock song. It is a familiar stylistic approach for the band, which was also used in the video for the band’s then most recent original single from the band, ‘Defying Gravity,’ which was released in 2016. The band has released a variety of covers since 2016, but ‘Defying Gravity’ was at the time, the band’s most recent original work and video. 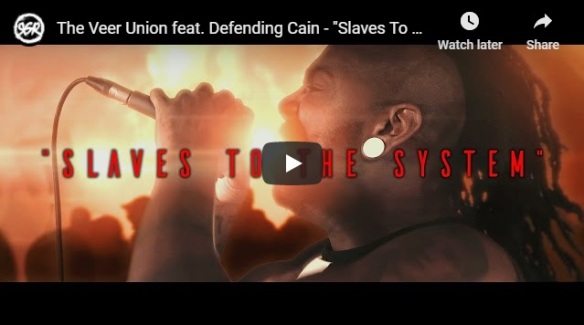 The musical arrangement at the center of ‘Slaves to the System (ft. Defending Cain)’ is just as familiar for audiences as the stylistic approach to the song’s video.  It features a guitar-driven, melodic hard rock approach that lends itself easily to works from the likes of Sevendust and Gears.

The lyrical theme featured in the song is a sociopolitical commentary that addresses the current state of the world.

The band addressed the song’s lyrical theme in a prepared statement.

“Our new video depicts the struggles we are all experiencing as human beings in 2020,” the statement reads. “We need to come together as ONE people regardless of race, sex, colour or creed and rise above it all. Information is power and we need to be more informed so that society can be unified, if we don’t do this, we will all be ‘SLAVES TO THE SYSTEM.’”

‘Slaves to the System’ is available to stream and download here.

More information on ‘Slaves to the System’ is available along with all of The Veer Union’s latest news at: