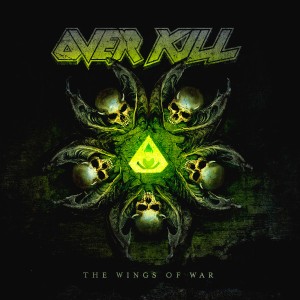 Overkill continued its “Welcome To The Garden State” docu-video series this week.

The band premiered the seventh video in the series on Tuesday.  In this latest entry in the ongoing series, the band’s members talk about the rise of the internet and its impact on music sales.  It is a discussion that will please fans of physical media.

Overkill has released six other videos previously in the series, with each video covering a variety of topics.  The whole list of videos and topics is noted below.

‘Welcome to the Garden State’ is the third single to be released from Overkill’s new album The Wings of War.  It follows the release of ‘Head of a Pin‘ and ‘Last Man Standing,’ both of which have had their own companion videos crafted. 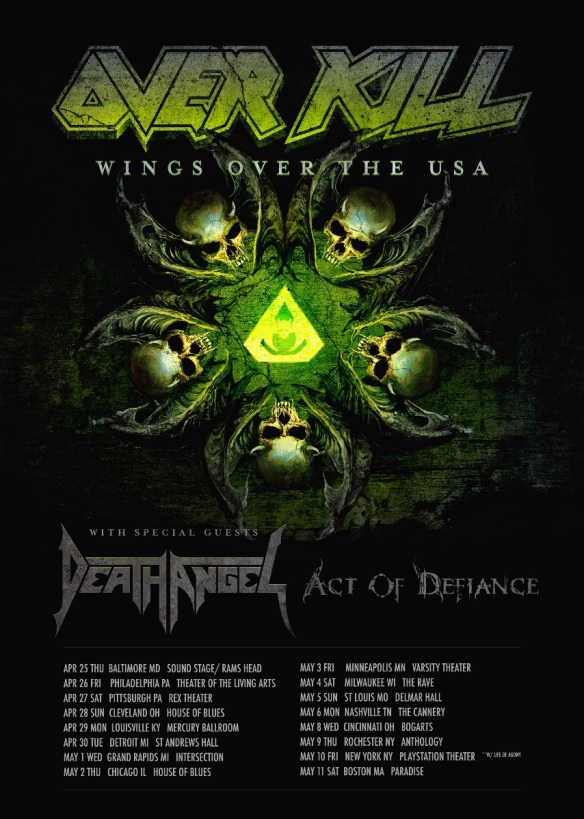 Overkill will launch a tour in support of The Wings of War on April 25 alongside Death Angel and Act of Defiance.  The two-week-plus tour is scheduled to start in Baltimore, MD and wind down May 11 in Boston, MA.  It also features performances scheduled in Nashville, TN; Detroit, MI and Milwaukee, WI.

The Wings of War is available on a variety of platforms, all of which are noted below.

The Wings Of War will be available for purchase in the following formats:

The full track listing for The Wings of War is noted below.

More information on The Wings of War is available online now along with all of Overkill’s latest news and more at:

Overkill released another new entry in its “Welcome to the Garden State” docu-series this week.

The band premiered the latest installment in the series on Thursday.  This latest addition finds the band’s members talking about venues that they attended in their formative years, and the venues in which they performed.  The segment runs almost eight minutes.

The band’s members discussed in the series’ previous installments, the East coast vs. West coast sound, their early influences and the band’s place in the industry, and the band’s roots.

The band’s docu-series is just part of its efforts to promote its forthcoming album The Wings of War.  The band has also released videos for the album’s singles Head of a Pin and Last Man Standing.

Along with its new video, the band also recently announced a new slate of live dates in support of The Wings of War.  Death Angel and Act of Defiance will serve as support on the tour.

The tour’s schedule is noted below.  Tickets are available now.

The Wings Of War will be available for purchase in the following formats:

The full track listing for The Wings of War is noted below.

More information on The Wings of War is available online now along with all of Overkill’s latest news and more at:

Chicago has, for ages, been a hotbed for great musical talent and a place where some of the biggest acts have come on their tours, including the acts lined up to perform at The Forge, the city’s foremost concert venue.

The Forge released this week an extensive new list of acts scheduled to perform at the venue.  The schedule runs from Feb. 9 and runs through June June 29.  Dead Horse Trauma opens the new schedule alongside Oblivion Zero, Consume The Divide, A Silent Truth and torn By Tentacles.

Also scheduled to perform at The Forge on its latest schedule are: Sons of Apollo on Feb. 18 alongside Drifting; Act of Defiance on March 15, Hatebreed on March 20 alongside Crowbar, The Acacia Strain and twitching Tongues; Satyricon and Inquisition on May 20; Uli Jon Roth on June 29; Flaw, Bedlam, Static Signal and Undeclass on March 29 and many others.

The current schedule or The Forge is noted below.

More information on The Forge’s schedule is available online now along with all of its latest news at: For those about to rock, we salute you!

Yes, everyone knows that phrase from AC/DC’s classic song by the same name.  As popular as it is, it is more than just a song lyric and title.  It is a statement of honor for the acts and audiences who span the rock community.  This year, as with every year prior, there are so many bands to honor as the year nears its end, including hard rock and metal bands.  In case it hasn’t become clear by now, this article focuses on this critic’s choices for the year’s top new hard rock and metal albums.  As with every list before, compiling it was not an easy task.  New releases from Project 86, Arch Enemy, Iced Earth, and so many others made this year’s field of new hard rock and metal albums very crowded.  That is putting it lightly.  Between well-known mainstream acts and their lesser-known independent counterparts, the two sides collectively offered so many impressive new albums.

Topping this critic’s list of the year’s top new hard rock and metal albums is Project 86’s latest album Sheep Among Wolves.  The band’s 10th full-length studio recording in 20 years, this record takes all of the best elements of the band’s past — both musically and lyrically — and uses them to craft a work that is just as memorable and engaging as its predecessors.  Also on this year’s list from Phil’s Picks are new albums from — as already noted — Iced Earth and Arch Enemy — as well as new offerings from Overkill, Act of Defiance, Prong, Adrenaline Mob, Blacktop Mojo and others. As with every list, this list presents this critic’s Top 10 titles plus five additional titles for a total of 15 records.  That being noted, here for you is Phil’s Picks’ 2017 Top 10 New Hard Rock & Metal Albums.

That’s all for this list.  Again, it was not an easy list to compile.  Acts the likes of Eve To Eve to Adam, Marty Friedman, Sepultura, Annihilator, Mastodon and so many others all deserve their own share of credit.  With that in mind, it becomes easy to see why no disrespect was meant to any one act or another here.  Every noted act released its own impressive album.  Only so many spaces were available, sadly.

2018 is already shaping up to be an interesting year in its own right, with new material from Ministry on the way alongside new albums from Judas Priest, Saxon, Machine Head, Corrosion of Conformity, Tool, Clutch and lots more.  Stay tuned for all of that in the new year.  To keep up with all of the latest sports and entertainment reviews and news, go online to http://www.facebook.com/philspicks and “Like” it.  Fans can always keep up with the latest sports and entertainment reviews and news in the Phil’s Picks blog at https://philspicks.wordpress.com.

There’s only a week and a half left in 2015 after this week. That means that the days are finally really ticking away. And as they pass by so do the year-ender lists from all of the critics. That includes this critic. So far this month, Phil’s Picks has revealed its top new EPs, World Music albums, County, etc. albums, Rap and Hip-Hop albums, Children’s albums, and Rock albums. There have even been lists for the year’s best new live CD recording and album re-issues. Now we come down to the last two lists of the music universe for this year. Today the first of those lists will be revealed. That list is the list of the year’s best new Hard Rock and Heavy Metal albums. The second and final music list of the year is the year’s best overall albums. That list will come alongside the list of the year’s top new movies later on. So for now, today brings the last of the music year-enders. And it’s quite a doozy. It was anything but easy to assemble. Slayer grabbed the top spot with its new album Repentless. Saxon is there, too as is Annihilator, Gloomball, Between The Buried and Me, and many others. As with every previous list, the Top 10 albums make up the main body of the list. The bottom five are each honorable mention as they simply could not be ignored. That brings the total list to fifteen albums. SO without further ado, here for your reading pleasure, dear readers, are the Phil’s Picks 2015 Top 10 New Hard Rock and Heavy Metal Albums.