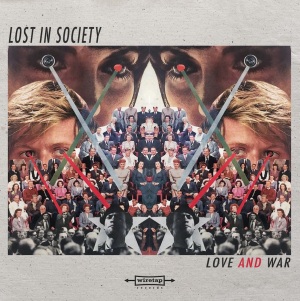 Independent punk rock band Lost in Society is presenting its own state of the union address in its latest single.

The band debuted the video for its latest single ‘We Want Change‘ Thursday.  The song is the lead single from the band’s forthcoming EP Love and War, which is scheduled for release Oct. 2 through Wiretap Records.

The video features the song’s lyrics in large, bold font against a backdrop consisting of footage of protests and civil unrest that has happened across America throughout the nation’s history.  The combined lyrical and visual presentation is meant to help translate the song’s sociopolitically charged message.

“’We Want Change’ basically encapsulates our current frustration and outrage at what is going on in our country right now,” he said. “We’re seeing a system that supports violence against marginalized groups and doesn’t hold their peers accountable for their actions. This song is a call to not be silenced, or intimidated. We stand with these movements as allies, and this is our way of showing our support.”

The musical arrangement featured in the band’s new single will appeal to fans of bands, such as The Distillers and American Television with its gritty vocals and equally grinding guitars, bass and solid time keeping.

‘We Want Change’ is available to stream and download here.

In related news, Lost in Society is scheduled to perform a live streaming show at 6 p.m. Sept. 13 though the official Facebook page of the Blue Bird Theater.  The band’s performance is presented through AEG.

Bassist Nick Ruroede had the following to say of how the show came to be:

“One of our buddies in Denver reached out to us and mentioned Bluebird was doing these cool Livestreams so he ended up connecting us and we were able to put something together,” he said. “Like everyone else we miss playing live so we’re pretty excited for a full band live stream.”

More information on Lost in Society’s upcoming livestream concert, its new single and video is available along with all of the band’s latest news at:

A brand new music festival is coming to Florida.  The first annual Fort Rock festival will be held Sunday, Aril 14th at the JetBlue Park in Fort Meyers, Florida.  The festival’s initial lineup has already been announced.  It includes:  The Offspring, 3 Doors Down, Stone Sour, Papa Roach, Volbeat, In This Moment, Escape The Fate, Device (with David Draiman), Pop Evil, Otherwise, Mindset Evolution, and a whole bunch more.  Tickets go on sale Saturday, February 23rd at 6am EST and will be available online at http://www.FortRockFestival.com.  General Admission tickets are $44.50.  General Admission Party 4-Packs are also available at a cost of $129.50.  VIP tickets are available for $89.  Discounted hotel tickets will be available soon.  There will be two pre-sale events before general tickets go on sale.  The pre-sales will take place on the Fort Rock website as well.

Fort Rock is produced by Danny Wimmer Presents and AEG, part of the team behind the annual Rock on the Range festival, Carolina Rebellion festival and Welcome to Rockville festival.  It is sponsored by Fort Meyers radio station 99X, Monster Energy, Jagermeister, and f.y.e.

For all the latest updates on band lineups and more, audiences can go online to the official Fort Rock website, http://www.FortRockFestival.com or “Like” its Facebook page, http://www.facebook.com/fortrockfestival.