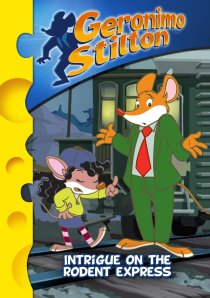 Geronimo Stilton: Intrigue on the Rodent Express and Other Adventures, the latest home release from the short-lived Canadian TV series, is another fun collection of episodes for the whole family. The new DVD contains four more episodes from the series’ twenty-six total episodes. Whether or not one is familiar with the Geronimo Stilton literary series or the TV series spawned from the books, viewers will all agree that there is plenty to say of this new home release. The first aspect worth noting in this group of episodes is its writing. The TV series is an import. But it will translates well enough for audiences of any age to enjoy it. The next factor to be taken into consideration in this compilation’s success is its animation style. One part hand-drawn and seemingly one part flash/CG, it still manages to maintain its own identity among the masses of full-on CG series that pollute the television spectrum today. Last but definitely not least worth noting is the show’s voice cast. Most viewers likely don’t know the cast’s names. But they will definitely recognize the cast’s voices. That who’s who of voice actors, the animation, and the writing all come together to make this DVD another from Entertainment One that is worth at least one watch regardless of how familiar one is with the series or the books on which it is based.

The first aspect of the new compilation from Geronimo Stilton that viewers will appreciate is its writing. The series is an import from Canada. Few may realize it, but there is a difference in the writing (and overall structure) of Canadian-based series and American television series in general. The case with this series is different, though. American audiences will enjoy the episodes on this disc just as much as their Canadian counterparts. It translates so well primarily because of all the action and comic relief tied into each of the four episodes. Geronimo’s globe hopping adventures echo hints of both Indiana Jones and James Bond in one. And parents will appreciate the pop culture references tied into each script.  Those pop culture references include spoofs of Agatha Christie and so many classic kung-fu flicks of the 1960s just to name a couple.  The Agatha Christie spoof comes in the DVD’s opening episode, “Intrigue on the Rodent Express.  It’s a reference to the famed story, Murder on the Orient Express.  The original story was written by Agatha Christie and is not only one of the most famous detective novels of all time, but was also adapted into an equally famous big screen feature.  The spoof of all the classic kung-fu flicks comes in “The Mask of the Rat-Jitsu.”  This one sees Geronimo getting caught up in a web of intrigue centered around a group of ninjas led by an evil mastermind bent on stealing a priceless mask.  Younger audiences won’t get the references.  But their parents (and potentially even grandparents) will appreciate the attempts by the show’s writers to reach them as well as their children and grandchildren.  It’s all a collective example of what makes the writing in this group of episodes central to the success of this DVD.

The writers that worked on all four episodes included in Geronimo Stilton: Intrigue on the Rodent Express and Other Adventures are to be commended for crafting stories that will entertain audiences of all ages.  The series’ animators are just as deserving of applause with these episodes.  They are deserving of applause in that they have largely crafted the cartoon through hand-drawn animation.  There were some potentially computer generated elements to each episode.  But by and large, it looks as if this cartoon was in fact crafted by hand.  There are still hand-drawn cartoons out there today.  But as many studios over utilize computers for their “animated” series, this series incorporating more hand-drawn animation than computer generated gives its episodes more of their own identity, which in turn makes them stand out even more among the masses.  The closest comparison that can be made in terms of the animation in these episodes is perhaps to DC’s short-lived series, Krypto The Superdog.  That it can only be loosely compared to one other series solidifies the originality of these episodes’ animation.  It’s one more reason that this new DVD is worth at least one watch.

The writing and animation that make up this latest compilation of episodes from the Geronimo Stilton animated series are both key to the overall enjoyment of this new DVD release.  There is one more factor that older audiences will appreciate in this latest collection of episodes from the Canadian import.  That factor is the series’ voice cast.  Most audiences might not know the names of the people that make up the series’ voice cast.  But they will recognize the various series on which the cast members work/have worked.  Patricia Drake is one example of this.  Most people don’t know her name.  She voiced the scheming Sally Rasmaussen (pronounced Ras-mousen) in Geronimo Stilton.  She has also worked on the cult favorite anime series Dragonball Z.  She also starred alongside Mandy Moore and Macauly Culkin in Saved as well as voicing characters in recent Barbie CG based features just to name a handful.  And fellow cast member Lee Tockar, who voiced a number of characters through each of the four episodes also has voiced characters in Johnny Test, Slugtera, and Max Steel and a number of others.  Having such experienced cast is important to the episodes on this DVD.  It is important in that it means the ability to properly interpret scripts and present the best possible performance.  That top notch performance means more enjoyment for audiences in the long run, which is exactly the case with these episodes.