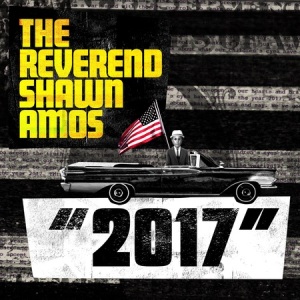 The Reverend Shawn Amos is giving audiences another taste of his next new album.

Amos debuted this week the song ‘2017,’ which is included in his forthcoming full-length studio recording The Reverend Shawn Amos Breaks It Down. The album is currently scheduled to be released Feb. `16, 2018. Amos said of the song, which was recorded with the surviving members of Al Green’s famed 1970 rhythm section at Memphis’ Royal Studios, in a recent interview that the song is focuses on getting people to stop and think.

‘2017’ is just the latest single to be released from The Reverend Shawn Amos Breaks It Down. ‘Ain’t Gonna Name Names’ was released this past spring.

More information on ‘2017’ is available online along with Amos’ new album and more at: 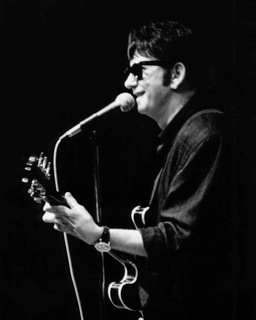 Legendary musician Roy Orbison is gone but definitely not forgotten.  The legendary musician will posthumously receive an award from the Musicians Hall of Fame and Museum.  Orbison will be awarded the Iconic Riff Award.  The award, which is being awarded for the first time, is being awarded to Orbison for his hit 1964 song, ‘Oh, Pretty Woman.’  The song would go on to become a number one single after its original release.

Heads of the Musicians Hall of Fame and Museum said the reason that Orbison was chosen as the first recipient of the award because of the riff that opens ‘Oh, Pretty Woman.’  The song itself has been covered by countless artists. It rose to its biggest fame thanks to rock band Van Halen’s cover of the song.  It was also the inspiration for the hit 1990 rom-com, Pretty Woman, starring Richard Gere and Julia Roberts.  The song itself can even be heard in the movie’s soundtrack.

Along with its numerous covers and use in movies, ‘Oh, Pretty Woman’ the song is also included a new live concert recording from Legacy Recordings titled Black & White Night.  The DVD recording was released this week.  It was recorded in September of 1987 and includes the likes of: Bruce Springsteen, Elvis Costello, Jackson Brown, JD Souther, and Tom Waits joining the star for his hit song.

Roy Orbison is one of the music industry’s most well-known and respected names.  He started his career in 1956.  He was signed to the famed Sun Records at the time.  The label also boasted the likes of Elvis Presley, Jerry Lee Lewis, and Johnny Cash on its roster.  It wouldn’t be until he signed a deal and recorded for Monument Records in the early to mid-1960s that his career truly took off.  The release of ‘Oh, Pretty Woman’ marked the peak of his career at the time.  The song, which Orbison co-wrote with Bill Dees, would go on to sell seven million copies and spend three weeks at number one on the Billboard Hot 100 Chart.  It also peaked at number one on the British charts for three weeks.  This was an unprecedented feat for any American recording artist at the time.  That is because The Beatles were dominating both countries’ charts at the time.

A new collection of Orbison’s hits titled The Monument Boxset will be released November 26th.  The collection is a vinyl only package that includes three of the most well-known and beloved albums that Orbison recorded during his time with Monument Records.  Those records are: Lonely and Blue, Crying, and In Dreams, which was also just recently re-issued on CD.  The new box set also includes a fourth album that had not existed until now.  The album will be centered on ‘Oh, Pretty Woman’ and will be comprised of five tracks.  The album’s songs were chosen by Orbison’s own sons, Alex, Roy Kelton, and Wesley Orbison.  Orbison’s suns have maintained their father’s legacy, running Roy’s Boys LLC, which is responsible for managing their father’s likeness, image, and musical releases.

Roy’s Boys LLC and Legacy Recordings are set to release one more live Roy Orbison concert before the year ends.  The Last Concert – 25th Anniversary Edition chronicles what would be Orbison’s final concert before his death in 1988.  The concert was recorded on December 4th, 1988.  That was only two days before he would suffer a fatal heart attack.  The fact that he would pass away only two days later is only part of what makes the upcoming concert so important.  Orbison commonly closed his shows with a performance of ‘Running Scared.’  But recording engineers ran out of tape that night before Orbison performed the song.  The result of that shortage is that ‘Oh, Pretty Woman’ would end up being the final number from his final ever concert.  More information on all upcoming Roy Orbison releases is available online at http://www.royorbison.com and http://www.facebook.com/royorbison.  To keep up with the latest sports and entertainment news and reviews, go online to http://www.facebook.com/philspicks and “Like” it.  Fans can always keep up with the latest sports and entertainment news and reviews in the Phil’s Picks blog at https://philspicks.wordpress.com.

Sam Cooke is set to receive a very special honor.  His song, ‘A Change is Gonna Come’ is one of a small handful of songs to receive the “2013 Songwriters Hall of Fame Towering Song Award.”  The presentation will be made at the 44th annual Induction and Awards Dinner on Thursday, June 13th.  The dinner and awards ceremony will be held at the Marriott Marquis Hotel in New York City.

The song—which was originally written by Cooke in 1963 and recorded in 1964—was referenced as recently as the 2008 election by President Barack Obama after winning the election that year.  It was also used as an anthem during the Civil Rights movement.  Since its original release, it has been covered over five hundred times by various artists from the likes of: Aretha Franklin, Al Green, and Otis Redding to more modern artists such as: R. Kelly, Gavin DeGraw, and Seal just to name a few.  These are just a few of the song’s accolades.  It has even been deemed by National Public Radio (NPR) as “the most important ever recorded” and has been selected by the Library of Congress for inclusion into its National Recording Registry.  Cooke himself was posthumously inducted into the Songwriters Hall of Fame in 1987.

‘A Change is Gonna Come’ will be inducted into the SHOF along with works from Tony Hatch, Mick Jones & Lou Gramm, Holly Knight, JD Souther, and Steven Tyler & Joe Perry.  A full list of inductees and bios is available online via the SHOF’s virtual museum at http://songwritershalloffame.org.

Tickets for the induction ceremony are available now.  They start at $1,000 each.  They are available through Buckley Hall Events by phone at 212-573-6933. 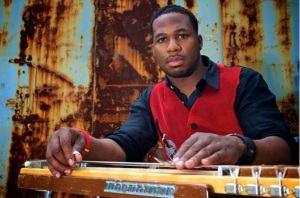 Robert Randolph and the Family Band are back.  The band has signed a new deal with legendary jazz label, Blue Note Records.  This news comes along with the announcement of a new upcoming album due out this Summer.  The long anticipated new release will be the first from Randolph since 2010’s We Walk This Road.  Blue Note president Don Was recently commented on the signing, expressing his joy at having Randolph as the label’s newest signee.  “Robert Randolph is an American original…he has mastered what is, arguably, the most complex instrument in the world and developed a unique voice that is equal parts street-corner church and Bonnaroo,” he said.  “Robert’s new studio album finally captures the energy and excitement of his legendary live performances…we are honored that he has chosen Blue Note Records as his new home.”

Randolph also shared his thoughts on having signed with Blue Note, expressing just as much excitement at this next step in his career.  “Blue note is a true music label with a 75-year history of working with great musicians like John Coletrane, Miles Davis and Al Green and the head of the label is a real musician and songwriter,” he explained.  Randolph will self produce the album, which will also feature members of his own family once again.  It will be engineered by Eddie Kramer (Jimi Hendrix, Led Zeppelin) and mixed by Jim Scott (Tedeschi Trucks Band).

Randolph will hit the road this Spring and Summer in support of his as yet untitled album.  His tour is currently slated to kick off April 6th at the River Run Rocks Series in Keystone, CO.  It’s set to run through August 16th and will include a pair of performances in North Carolina.  The first of those dates is Friday, May 10th at Wilmington, NC’s Greenfield Lake Amphitheater.  The second of his North Carolina dates is Saturday, May 11th in Beaufort, NC at the Beaufort Music Festival.  Fans can get a full list of tour dates online at http://www.facebook.com/rrtfb, http://www.robertrandolph.net, http://www.myspace.com/robertrandolph and http://twitter.com/rrtfb.

The Memphis Music Hall of Fame will become a reality this week.  After years of talks and work, the very first class of musicians will be inducted into the Hall this Thursday at the Canon Center for Performing Arts.  Among the artist included in the inaugural class of inductees are:  W.C. Handy, Elvis Presley, Jerry Lee Lewis, and Al Green.  Also included in this year’s class are some lesser known but still respected musicians such as:  jazz saxophonist George Coleman, gospel songwriter Lucie Campbell, and W.T. McDaniel, Booker T. Washington High School bandmaster.

The Memphis Music Hall of Fame initiative is part of the Smithsonian-connected Memphis Rock ‘n’ Soul Museum.  Memphis Rock ‘n’ Soul Museum Executive Director John Doyle shared his thoughts on the importance of the Music Hall’s inaugural event.  “We wanted to keep the ticket prices low, in order for the public to be able to come out”, said Doyle.  General admission tickets for the event are available for as little as $30.  Doyle added noting, “A lot of what we want to do with the Hall of Fame is about education both through the website and the gallery, but a lot of it is about paying tribute and really giving tribute to the musicians who put Memphis on a global map.  And we want the public to share in that.”

The inaugural Memphis Music Hall of Fame Induction Ceremony will take place this Thursday at 7pm at the Canon Center for Performing Arts at 225 N. Main in Memphis.  Tickets are available for $30, $50, and $100.  They can be purchased at any Ticketmaster location or online at http://www.ticketmaster.com.  They can also be purchased via phone at 1-800-745-3000.  More information on this Thursday’s even it available online at http://memphisrocknsoul.org.

The inaugural class of inductees into the Memphis Music Hall of Fame is as follows: