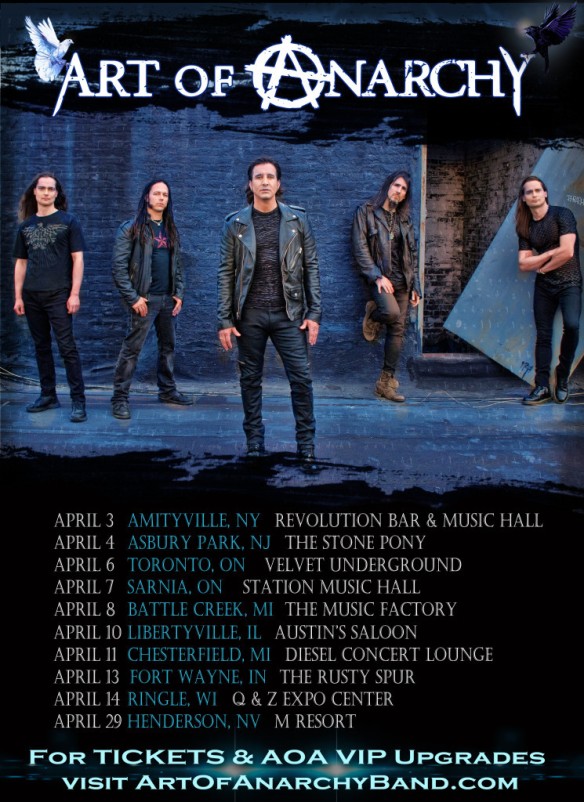 Art of Anarchy has announced new live dates in support of its new album The Madness.

The band announced this week it will embark on a short string of live dates next month beginning April 3 in Amityville, N.Y. The nearly month-long schedule takes the band to the Midwest and into the Southwest and also into Canada, eventually winding down April 29 in Henderson, NV.  The band’s current live schedule is noted below.

Stapp said in a recent interview that he was optimistic about working with the members of Art of Anarchy.

“I’m excited to be a part of Art of Anarchy,” Stapp said.  “I appreciate collaborating with other talented artists and I can’t wait to share our new music with the fans very soon.”

“The other members of AOA and I are equally excited to have Stapp on board,” Gomez said.  “This is the first band that Scott has fronted outside of Creed and his heart’s really in it.  Scott’s vision, his gift for gut-wrenching storytelling and his powerful vocals lend a bold new energy to the group.”

Thal thought bringing Stapp on to take Weiland’s place has been a boon for the band, adding he thought Stapp’s addition to the band helped take the band in a new direction.

“Scott’s style and the personal lyrics he’s been writing are taking the sound in a new direction – one that brings out the best in all of us,” Thal said.  “It’s a new chapter for us all, and I’m looking forward to sharing the new music with the fans and seeing what the future holds.”

“It’s been awesome having Stapp on board,” Votta said.  “Everyone is bringing their A-game and can’t wait to bring it live to the stage.”

Audiences that haven’t heard that new sound can hear The Madness’ latest single, its title track online now via the band’s official YouTube channel.  More information on The Madness is available online now along with all of Art of Anarchy’s latest news and more at: 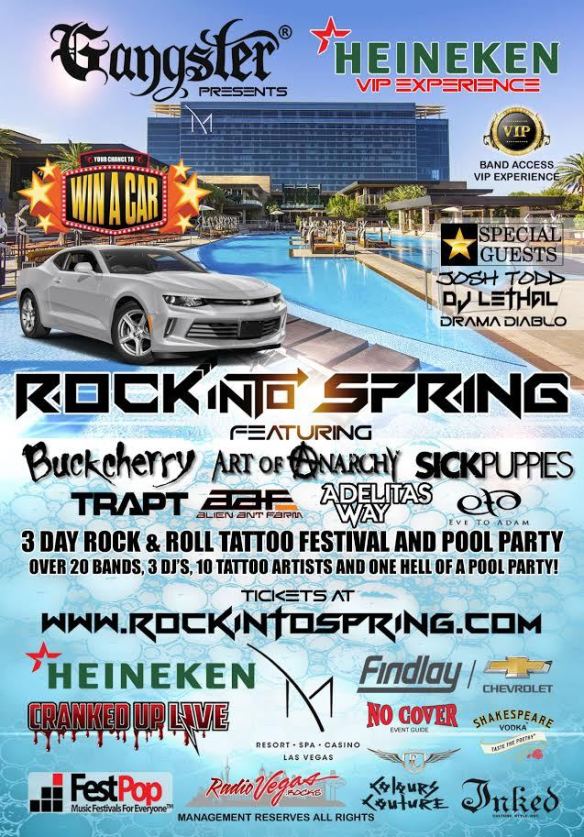 More new sponsors have been added to this spring’s upcoming Rock Into Spring festival presented by music products company Gangster.

The Las Vegas-based dealership will give away a brand new car on April 30, the festival’s final day.  The car will be given away during the event.

Heineken and Findlay Chevrolet are just two of the companies to recently sign on as sponsors for the event.  Shakespeare Vodka, No Cover Magazine, Presidential Limousine, SB Craft Jerky and Fest Pop also signed on as sponsors of the weekend-long festival.

The festival’s list of sponsors isn’t the only list that recently grew in size.  Two more bands were also recently added to the festival’s already extensive list of performers in the form of Buckcherry and Adelitas Way.

Along with its extensive list of performers, Rock Into Spring will also feature 20 top tattoo artists to provide concert-goers with new ink. They include Ink Master’s Randy Vollink, James Francis, Cleen Rock One, King Rock, MTV’s Drama Diablo and others.

More information on the Rock Into Spring Festival is available online now at:

The band, which consists of metal outfit Generation Kill and veteran rapper Darryl “DMC” McDaniels (Run DMC) and another metal super group of sorts called Generation Kill, is set to release its debut single ‘Fired Up’ Monday, July 4th.  The song comes from the band’s upcoming debut album The Dark Project, which is currently scheduled to be released later this year.  It will be released via Bumblefoot Records, the independent record label of Ron “Bumblefoot” Thal (Art of Anarchy, ex-Guns N’ Roses).  Audiences can check out a trailer for the song online now here.  About ‘Fired Up,’ DMC explained, “‘Fired Up’ is a foot-stomping, fist-in-your-face anthem, sort of like a MACK truck crashing into a packed football stadium.”  He added about the song, “‘Fired Up’ is a sports-inspired attitude about giving all you got in this “game of life.” And like my verse says, you must do it without cheating!”

The release of ‘Fired Up’ will be followed up immediately the next day with the release of the album’s second single ‘Suicide.’  In discussing the song, DMC noted that the song is the polar opposite of ‘Fired Up.’ “‘Suicide’ is really personal to me because I was fighting depression so I know what individuals, young and old, go through,” he said.  “People will always tell you that you shouldn’t feel the way you feel.  Easier said the done!  I discovered the first step to healing is be truthful to yourself about how you’re feeling, then look at WHO and WHAT circumstances are causing these feelings, then deal with those to remove those from your life.  Me and  [Rob] Dukes (Generation Kill, ex-Exodus) wrote these lyrics no holds barred because that’s how we, and a lot of others, felt.”  ‘Suicide’ will also be featured in the audio version of DMC’s new book Ten Ways Not To Commit Suicide.  It is set to be published worldwide Tuesday, July 5th.