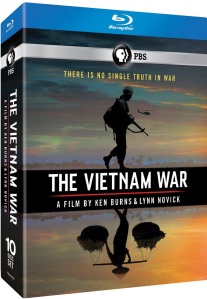 Ken Burns and PBS have partnered to release the famed documentarian’s latest offering on DVD and Blu-ray late this summer.

Ken Burns: The Vietnam War will be released Tuesday, Sept. 19 on DVD and Blu-ray.  The 1,080-minute (18-hours) program examines the conflict in a previously untold fashion with interviews from almost 100 witnesses and uses rarely-seen, digitally re-mastered footage from historic news broadcasts, home movies and audio recordings from the Kennedy, Johnson and Nixon administrations.

Audiences can see a preview of the program online now here.

Lynn Novick, who co-directed and produced the documentary alongside Burns and fellow co-producer Sarah Botstein, said some surprising revelations were made over the decade in which The Vietnam War was created.

“We are all searching for some meaning in this terrible tragedy.  Ken and I have tried to shed new light on the war by looking at it from the bottom up, the top down and from all sides,” Novick said.  “In addition to dozens of Americans who shared their stories, we interviewed many Vietnamese on both the winning and losing sides, and were surprised to learn that the war remains as painful and unresolved for them as it is for us.  Within this almost incomprehensibly destructive event, we discovered profound, universal human truths, as well as uncanny resonances with recent events.”

“The Vietnam War was a decade of agony that took the lives of more than 58,000 Americans,” Burns said.  “Not since the Civil War have we as a country been so torn apart.  There wasn’t an American alive then who wasn’t affected in some way – from those who fought and sacrificed in the war to families of service members of POWs, to those who protested the war in open conflict with their government and fellow citizens.  More than 40 years after it ended, we can’t forget Vietnam, and we are still arguing about why it went wrong, who was to blame and whether it was all worth it.”

It offers more than 100 minutes of bonus material, too, including a 45-minute preview program, two programs focusing on contemporary lives of two people involved in the conflict and much more.

As if that expanse of bonus material is not enough, the program, which will air on PBS stations nationwide between Sept. 17 – 21 and Sept. 24 – 28, a companion outreach and public engagement program – provided by PBS stations nationwide – aimed at giving communities the chance to take part in a national discussion about the war.

A website and educational initiative will also be launched online at PBS Learning Media aimed at engaging teachers and students everywhere about the war.

A companion standalone book is also available for order for $59.99.  The book and box sets can be pre-ordered online now via PBS’ online store along with complete sets that include the box sets and book.

More information on this and other titles from Ken Burns and PBS is available online now at: