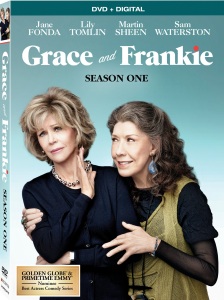 Netflix’s original comedy Grace and Frankie is coming to DVD this spring.

Lionsgate announced this week that it will release the first season of the original Netflix comedy Grace and Frankie on Tuesday, April 12th. The series centers on its title characters–played by Jane Fonda and Lily Tomlin—who had been at odds with one another until their husbands—played by Martin Sheen and Sam Waterston–reveal one day that they are gay and want to marry one another. This leaves Grace and Frankie to turn to one another to get through it all. Season One’s thirteen will be spread across three discs in a DVD + Digital platform that will retail for MSRP of $29.98. Along with its thirteen episode-run , Season One will also feature a number of bonuses including but not limited to: audio commentaries, a sneak peek at Season Two, which is currently slated to premiere May 6th, and a gag reel.  The full list of the set’s bonus material is noted below.

More information on this and other titles from Lionsgate is available online now at: