Independent metal band Lost in Static debuted the video for its latest single this week.

The band debuted the lyric video for its new single ‘Jordan‘ Thursday. The song and video are the second from the band’s forthcoming self-titled debut album, which is scheduled for release later this year.  Its release date will be announced later.

Lost in Static debuted the video for the album’s lead single, ‘Feel Alive‘ more than nine months ago.

The video features footage of the aftermath of a motor vehicle collision and crosses that with the song’s lyrics, which according to a statement about the song, are about a friend of the band who died in a wreck.

“Our new single “Jordan” is our second track to be released from our upcoming debut record,” the statement reads. “’Jordan’ was a childhood friend who unfortunately lost his life from drinking and driving. This song was written in his honour. It’s heavy, it’s beautiful and we hope everyone is going to love it as much as we do!”

The story serves as a starting point for discussions on the dangers of drunk driving and in relation, the disease that is alcoholism.

The song’s musical arrangement is a fiery composition that translates well, the emotions felt by the band members when they learned of their friend’s passing.  Its heavy guitars, screaming vocal delivery and pounding drums and  bass will appeal to fans of bands, such as Whitechapel, Periphery, and Born of Osiris.

More information on Lost In Static’s new single and video is available along with all of the band’s latest news at http://www.facebook.com/lostinstatic.band.

The song’s musical arrangement will appeal to fans of Lamb of God, Chimaira, Murkocet and other similar acts.  One could even argue that there is a hint of a Slayer and Machine Head influence incorporated into the arrangement.  Musically speaking, the song seems to come across as a sort of social commentary, though no explanation as to the meaning of the song’s lyrics in its news release.

‘Enter The Gallows’ was engineered by Chuck Macack (Born of Osiris, Oceano) and mastered by Chris Collier (Prong, Korn, RiotV) of CMC21 Productions at ElectroWerks Recording in Downers Grove, Illinois.

While the band is calling its new single its “first official” single, it is actually the band’s third single so far.  It follows the release of the band’s debut “demo” ‘Collide‘ on May 14 and its follow-up, ‘Born To Choose‘ only days later on May 20. 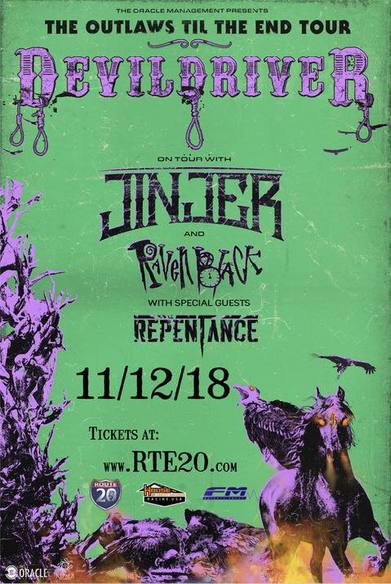 More information on Repentance is available online now at:

More names have been added to this year’s edition of the Dirt Fest.

r front man Michael Woodruff on vocals.  Matt Dalton is one of the festival’s promoters.  He discussed the addition of Born of Osiris and For The Fallen Dreams in a recent interview.  “I’m thrilled to have my friends in Born of Osiris and For The Fallen Dreams join our event,” he said.  This will bee the first time FTFD has played in their home state of Michigan in over two years and their first time back to Dirt Fest since 2006.  With Chad (Ruhlig) back fronting the band the timing couldn’t be better.”

This is not the first time that the annual festival, which is held every year in Michigan, has given bands from “The Great Lakes State” time in the limelight.  In 2012 Chiodos reunited after having taken some time apart previously.  And the band’s first show back was at Dirt Fest.  The performance featured original front man Craig Owens back at the helm.  Dirt Fest has also developed quite the reputation for itself for having launched the careers of other major metal acts such as: Battlecross, Wilson, and See You Next Tuesday.  Dalton discussed the festival’s reputation along with the new additions to this year’s festival in his interview.  “Our priority has always been Michigan bands and this year is no exception,” he said of the festival’s reputation.  “In addition to Walls of Jericho, Wilson, Saint Riley, and of course For The Fallen Dreams, dozens of up-and-coming Michigan bands like It Lies Within and Heartsick will have a chance to perform alongside the big guys.  You never know who the next break out artist will be.”

2016 marks the 19th year for the Dirt Fest.  Along with the bands already noted, this year’s festival lineup also features some of the biggest names in the metal community today including: Hatebreed, Killswitch Engage, Trivium, Soil, Asking Alexandria, Attila, Bury Your Dead, and many others.  It will be held at the Crofoot Festival Grounds in downtown Pontiac Michigan on Saturday, August 13th.  Tickets for the festival can be purchased online now here.  More information on Dirt Fest is available online now at: